KK Tells You Your Opinion of Robin Hood

AK and I took in th 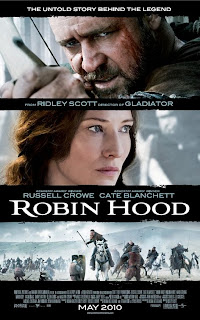 e new Robin Hood this past Sunday on a heavily chaperoned date. We had been anticipating its release since we first saw the trailers, and the film did not disappoint. Starring Russell Crowe as Robin Longstride (Robin of the Hood), the film takes the position of being sort of a prequel to the Robin Hood stories with which most of us are familiar.
Longstride is an archer in the army of King Richard the Lionheart (Danny Huston) and the gang has stopped to sack a French castle on their way back to England from The Crusades. After a tough day of storming the castle and skewering Frenchies, Longstride and his homies are doing a little partying and gambling.
Since the character is played by Crowe, Longstride can't go more than 2 minutes without punching someone. In the melee that ensues, the King is knocked down and Longstride has to account for himself to the big cheese. Channeling a NY Times op-ed piece, Longstride waxes eloquent about the poor Muslims they have killed and how politically incorrect these dang Englishmen are, and is promptly thrown in the stocks with what turns out to be his Merry Men (not that way). 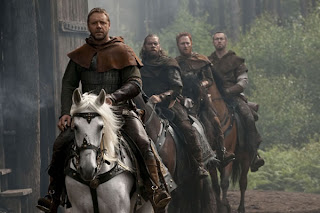 What Merry Men looked like in the Middle Ages.

The King is killed in the morning fighting (by a French cook, no less) and Longstride uses this opportunity to skedaddle and take another shot at the English crown (damned Colonials). While making his way to the French coast, they run across the scene of an ambush where English turn-coat Godfrey (Mark Strong) has ambushed the Crown Jewels and their guard. Longstride double bushwacks the bad Englishman and his French cronies and meets the real Robert Loxley (not Kevin Costner). Though all the French are killed, Godfrey escapes with a nasty scar on his cheek courtesy of Robin's longbow (not that longbow).
Loxley's dying wish is that his sword be returned to his father in England. Not wanting to be a total wanker, Longstride agrees to do so and he and his men (Kevin Durand as Little John, Scott Grimes as Will Scarlett and Alan Doyle as Allan A'Dayle) set off for England, disguised as knights, with the sword and the Crown.
Intending to get off at the first stop, Longstride et al. oversleep and wind up in London docked at the palace. He is forced to be the one to tell the Queen and Prince John (Oscar Isaac) that King Richard has been killed. Despite introducing himself as Robert Loxley, no one recognizes the ruse and the Merry Men are free to flee London.
They all make their way to Nottingham, which in the absence of Robin Loxley, is being tended to by his wife Marion Loxley (Cate Blanchett) and his elderly father Sir Walter Loxley (Max von Sydow). Nottingham is in tough, what with the high taxes caused by that damnable Crusade (did I mention this film detests the Crusades?) and the Church stealing all the corn (this film also dislikes the Church). Never fear though, as the bad priest is leaving and good ol' Friar Tuck (Mark Addy) is in place, complete with a stash of booze that could keep the Kennedy's busy for a week....end. 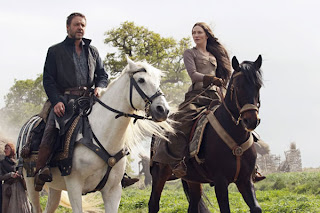 So now that the Merry Men are in Nottingham with the magic sword (which just happens to remind Longstride of something. No not that.), you might wonder what comes next? Well, Longstride just waltzes into Loxley's house and tells his family that he has died in battle. Naturally, the father wants Longstride to assume the position of his dead son and live at the house. Just your basic story of messenger of death becomes family.
In the span of about 48 hours, Longstride saves Nottingham from famine and taxes etc, etc. and looks forward to a long life (maybe a good year or two, given age expectancy in those days) of shagging Loxley's widow and drinking Tuck's mead. 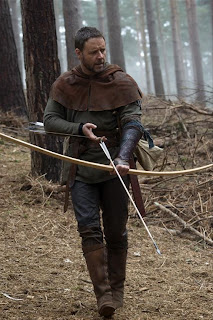 Be vewy qwiet. I hunting wabbits.
Not so fast buddy boy. Longstride forgets that England now has an incompetent fool on the Throne, a turncoat advising him into starting a civil war and a French army sailing for England. The booze and sex will have to wait a couple more days.
This is not to say he will have to go it alone. The ever-wise William Marshall (John Hurt) has been keeping tabs on that bad King John and the traitor Godfrey, who has been up North marauding with his French buddies. Marshall and the disaffected Englishmen from the North have been pooling their resources to march on London and depose the King, which is just what Godrey and the French want!
Longstride, who has basically taken over Nottingham by now, turns up at the tete a tete to speak for Sir Loxley. Despite being a common archer, his gift of gab convinces the assembled men to chill, and together with the newly arrived King, they figure out its just the dang French pushing their buttons. No need for Englishmen to go hatin' on Englishmen.
So now we're good, right? Nope, not even close. Godfrey's spy has tracked down Longstride and Co. in Nottingham, so now the bad Frenchies are pillaging the village looking for him. Much carnage ensues, Sir Loxley is killed, Marion is nearly raped and only some oddly placed forest urchins save her and others from burning. Robin eventually shows up and sends the Frenchies fleeing, but not before Godfrey escapes again. Slippery bugger.
The seemingly uncatchable Godfrey has fled to the coast, where he lights signal fires to guide in the approaching French army. Thinking victoire is at hand, Godfrey is stunned to see a united English force appear on the cliffs overlooking the beach. With archers raining arrows on the Frenchies and English cavalry charging up the beach, the fate of the French is sealed. Thanks in no small part to Cate Blanchett, who tries the old trick up dressing up in armor and coming to fight hoping that no one will notice she is a woman, despite the fact that the armor comes with a C cup steel bra. 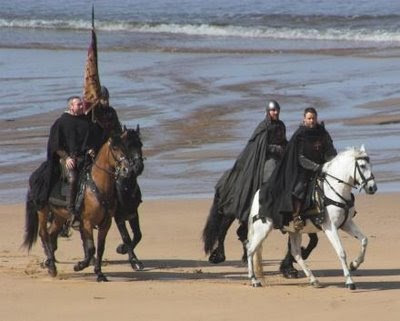 Crowe and Co. prepare to shoot a Light Days commercial.
Long story short, the English win, Robin shoots Godfrey through the neck with an arrow and England lives happily ever after. Well, not quite. King John reneges on his promise to give England democracy (the cad), even though Longstride gave such a wicked speech. King Johnny even has the gall to declare Robin Hood an OUTLAW, thus setting up at least one sequel, since we didn't even get to see how bad the Sheriff of Nottingham (Matthew Macfayden)can be.
Despite the suspect speeches and assurances to the audience that these Middle Ages Englishmen were very enlightened and caring souls, I really liked this movie. Ridley Scott and Russell Crowe make an excellent team, and everything from the acting to the scenery was wonderful. The Merry Men, Kevin Durand especially, provided some well placed comedy, and Crowe was at his affable best as Robin Hood. Even Blanchett, who normally doesn't do much for me, managed to be extremely believable in her role as Marion, boob shaped armor aside.
I am even willing to go so far as to say I will definitely attend most of the sequels that are sure to follow. This group took an oft-told story and made it fresh, and added enough creative license to keep me guessing. In light of this, I give this film 3 out of 4 Movie Theatre Handies.
Posted by kanadienkyle