As you know, I've been pretty down on The Pacific because frankly, up until last week, it sucked.  However, last week's ep was much better, and this week's episode was fantastic...but you had to watch all the way to the end to feel its impact. 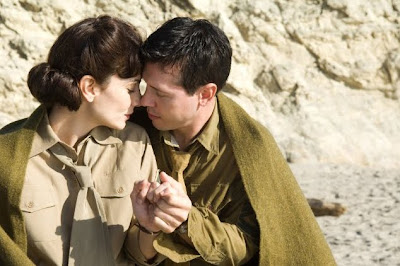 Excluding a two-minute Sledge scene, this episode focused entirely on John Basilone, played by Jon Seda.  I was really disappointed when they sent Basilone back to the States to sell war bonds early on in the season, because his was one of the more interesting wartime characters and watching someone sell war bonds in less-than-stellar.  Plus, Jon Seda hot.  So, I was excited to see him back this week, although not so enthused at the possibility of an Melbourne-type episode without any actual war.
Like all of the episodes, "Iwo Jima" starts out with interviews from the actual soldiers detailing the massacre that was Iwo Jima.  It was the only campaign where more American soldiers died than Japanese soldiers.  Cue a battle scene?  Nope, cue Basilone on the radio with his brothers.
Now a super celebrity, Basilone is tired of schilling for the US government and wants to join his countrymen back in battle.  He persuades the Marines to allow him to train new recruits, where the boys alternate between complaining about how hard he is working them and mooning over how famous he is.  The only person not starstruck by Basilone?  A cook named Lena Riggi (Annie Parisse), who shoots him down over and over again until she finally gives in to his advances.  They discuss how much they love the Marines, and Basilone decides to reenlist (he is due to be released in July).  Before he leaves, they are married and you get to see some Law and Order boobs during their honeymoon.
With 5 minutes left in the episode, we find Basilone leading his troops on Iwo Jima.  At this point, I couldn't believe that they had spent so much time on the Basilone-Lena relationship and was complaining to Kyle about it when...Basilone is shot and killed.
I did a search on the real John Basilone today - and they really could have dedicated the entire series to him.  Read a little bit about him here.  Strangely enough, the writers changed it so that he was shot instead of killed by a mortar blast.  Odd.  But really, they did a good job of developing the Basilone character so that you had an emotional reaction when he died.  Except that now one of the only characters I like is off the show.  Crap.
Posted by Amanda