This is Your Opinion of THE LOSERS

Amanda and I braved the rain last night and made our way to the Carmike 10 to see The Losers. Based on the Vertigo comic of the same name, features a motley crew of soldiers/mercenaries reminiscent of the A-Team. 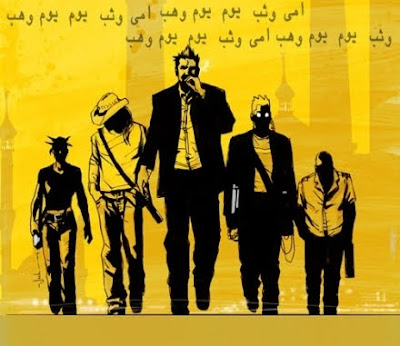 Starring Jeffrey Dean Morgan as Clay, Zoe Saldana (sans blue paint) as Aisha and featuring a "Where the hell has he been?" moment with Jason Patric as the nefarious Max, the film is a little loose on plot and story but pretty heavy on action and cheesy lines. In other words, the perfect summer movie.
The Losers revolves around a team of special ops military men who are framed for a crime they didn't commit, and must go on a wild and crazy suicide mission to get their good names back. Sound familiar? Chris Evans, Idris Elba, Columbus Short and Oscar Jaenada round out the cast, playing B.A., Face and...oops, I mean Jensen, Roque, Pooch and Cougar.
*SPOILER ALERT* - Although it's pretty obvious what's going down throughout this movie.
After going into hiding, the team is approached by Aisha, who ostensibly is able to get them back into the United States and fund their mission if the guys agree to find and kill Max. They succeed at getting into America, securing weapons and pull off a slightly improbable heist in downtown Miami. I say slightly improbable because I have never witnessed an armored column driving around the city. 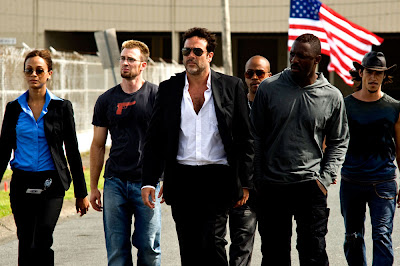 The gang practices walking 6-abreast.
As it turns out, they didn't capture Max himself, but rather a harddrive belong to Max. The hard drive is encrypted, so they have to pull off yet another plot filler, er, caper to get the algorithm that will allow them to get at the information. This is handled with aplomb by Jensen, and they soon figure out that the hard-drive is basically an electronic check for $400,000,000.00. 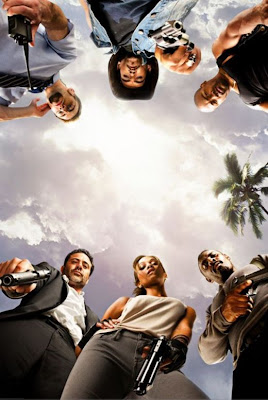 The Losers look down on you. How do you feel now?
Now we have to make a big leap to figure out that the hard-drive has to get to Los Angeles, so the guys can tie Max and his money to the operation gone wrong in Bolivia (the one that got them in hot water to begin with). Roque isn't too pleased with all this nonsense and doesn't really trust Aisha, so this brings up some tension between Roque and Clay. Yadda, yadda, yadda it turns out that Aisha isn't who she says she is and a little gun play ensues. 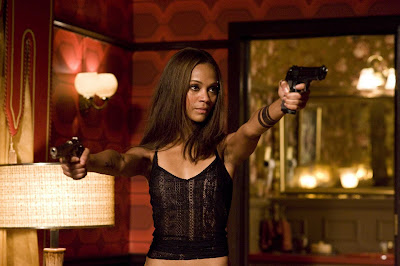 Zoe Saldana holds off James Cameron and his ego as he begs her to star in Avatar 2: Electric Boogalo
Meanwhile, Max has been quite busy wearing fancy suits and acquiring several doomsday devices known as "snukes". Or Snooki's. Either way, they sound bad. He is obviously not pleased that the team is alive and in possession of his money, and if he had a mustache I am sure he would have twirled in menacingly. However, he is sans mustache, so he just kills a few people (physicists, umbrella holders, et al). His sinister goal is to somehow spread terrorism in the hopes that it will help America, but no one bothered to flesh this out. His henchman is from Quebec, so I guess we have to assume they are bad dudes.
After discovering Aisha was lying to them, the guys do some soul searching and briefly decide to call it all off (with one dude an expectant father), then say, "Just jokes, fellas, we're for sure down for this suicide mission." The mission being to get into this secret compound in LA and do something with the hard drive...
Anyways, the guys get in and are all set to caper-it-up when things go wrong. Roque is a turncoat (I haven't trusted Idris Elba ever since he appeared in The Office) and Max was, gasp!, in on the whole thing. He kills another physicist and holds some more hostage, and just when things look bleakest for the team (Pooch is shot in both legs, for example), Aisha shows up hip-firing a rocket launcher, causing explosions and subsequent ineptitude in the armed guards. Our 4 remaining good guys managed to subdue, while handcuffed, about a dozen heavily armed baddies. 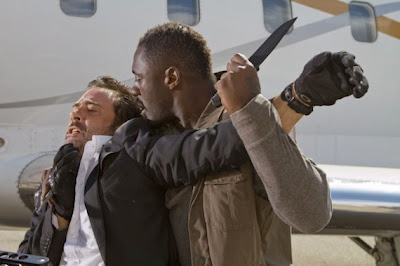 Elba, a former door-to-door salesman, shows how he used to make a sale.
There is, of course, a shootout and some further tension. Clay fights Roque, who almost gets away until a wayward motorcycle crashes into his plane and incinerates him. Clay, not quite done yet, tracks down Max and stops him from setting off a snuke. The bad news is Max escapes to star in a sequel. You had to figure it was coming though, as Clay had shot him at close range and Max merely flinched, as though he had a particularly gruesome hangnail.
The end. Basically. The team, now with Aisha on board, pull off a little subterfuge to get Pooch into the hospital just in time for her to give birth. Why the front doors of the hospital didn't work, I'll never know. And Jensen got into a fight at a girls soccer game. The end for real.
Though there are some plot holes in the film, not to mention several instances where audience members looked at each other and silently wondered, "What the fuck was that,", The Losers is a perfect summer popcorn movie. I am not at all familiar with the comic book version, so forgive me if the movie left out any key elements. But from a strictly movie-centric perspective, I think its a fine way to spend 90 minutes.
Of note is a mention in the Wiki article on the film that the movie was originally slated for a June 4th release. I wonder if it was bumped up so as not to compete with the A-Team?
All the same, I give this 2 out of 4 movie theater handies.
Posted by kanadienkyle