This episode surrounds a topic near and dear to our hearts, because Kyle just received his unrestricted Green Card notice in mail this week (if you haven't figured it out already, he's Canadian).  And yep, we went through the long, expensive, time-consuming, and legal route, unlike our friendly neighborhood victims this week.

But, more importantly, here is the latest casting story from my sister:

You know the dad who is killed (his wife and son make it through and are questioned)? So, here's the deal with all the decapitated heads in this episode. They come from a prop house. When a prop house makes these molds, they just hold on to them for future use in other projects (because they're super expensive to make). The prop house had 3 possible Hispanic-looking heads we could use (all of which are molds from actual actors). So instead of picking an actor for the role and then having their head cast, they picked a fake head and had to find the actor to see if they were available for the shoot. So for the 2 days that we were casting this, I had this picture of these 3 fake decapitated heads sitting on my desk, just waiting to find out which one we were going to use.  Sort of ridiculous.

The recap:
The show opens with a guy in a skull mask on an ATV chasing a man on foot.  The running man finally wears out, and the masked killer decapitates him.  Later, a group of teenager bicyclists accidentally find the head in a cooler outside of the police station.  Cue the BAU. 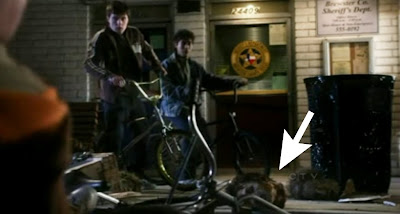 These kids don't look that upset about finding a severed head.  I blame video games.
There were actually three heads outside of the Terlingua, Texas police station.  All three victims were Hispanic, and two of the heads were covered in dirt like they were buried.  This is a familiar scene along the border - turns out, a Mexican drug cartel just recently presented ten heads in coolers to another lucky community.  So why not call the DEA?  Because the DEA doesn't want to deal with it each head was in a different state of decomposition, suggesting a serial killer. 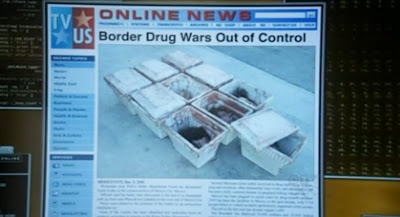 A better title would be, "Border Drug Wars Status Quo."
The BAU arrives in Texas to a warm and loving welcome from the local drug cartel, who are unhappy with the recent arrest of their head honcho, Omar Morales (Kurt Caceres).  The local Sheriff, Ruiz (Marlene Forte), complains that there have actually been over twenty missing illegals, but no one has made an official report because of the whole "illegal" thing.  She is the only one who doesn't blame it on Morales.  Morales doesn't cop to the decapitations - he says that if he were going to do it, he would chop up the victims and mail their body parts to their loved ones.  He says they are looking for the "Saint of Death." 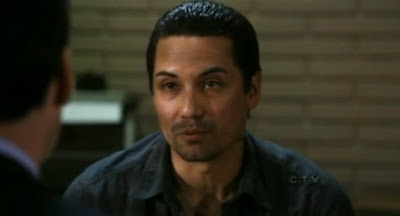 MORALES: Hypothetically, I'd cut him from crotch to chin and leave his intestines open for the animals - after I send his left hand to his wife, his eyes to his mother, and his tongue to his kids with a note saying their Papa died wetting himself.
HOTCH: That kind of statement would normally be call for concern, but since you said it was hypothetical, you're free to go.
The Medical Examiner (Lyn Mahler) tells the team that the victims all had sand in their noses - a sign that they were running.  She also tells them that one victim was almost blind, and the other two were older, suggesting that they were selected for their weakness. 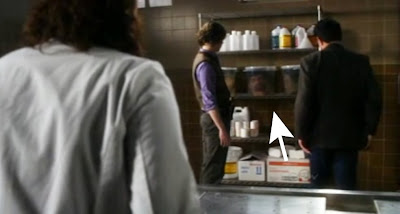 You can find head tupperware next to the sandwich bags in any local grocery aisle.
That night, the latest crop of illegals are border jumping - this time, it's a husband and wife and their young son.  The husband complains that he is not feeling well, and tells the others to go on without him.  His head turns up on Sheriff Ruiz's fence. 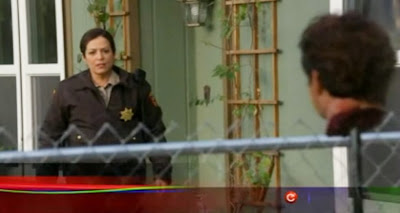 Our neighbors have a giant wooden flamingo wearing a cowboy hat on their front porch.  The wife says it keeps the riff-raff from stealing their newspaper.  If you ask me, this would be much more effective.
The team announces their profile: The unsub is a human predator.  He is probably weak or disabled in some way, and is either alone or in an abusive relationship.  The interview a guy who helps set up the illegals once they get over the border.  He tells them to check out safehouses, and so Garcia tappity-tap-taps and identifies them all. 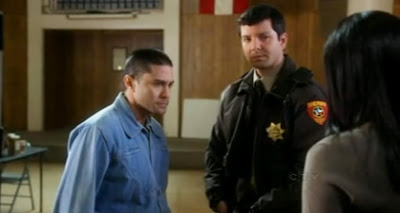 Is the guy on the left super short, or the guy on the right super tall?
(PS - I know how to ask the tough questions.)
At the "safe"house (the mother gets raped there, so it's actually a less-than-safe safehouse), they find the wife and child of the aforementioned victim.  The boy (Nathaniel Pena) tells them that he saw "the sun."  When his mother (Kristen Alaniz) corrects him - they jumped the border at night - he insists that it was the sun. 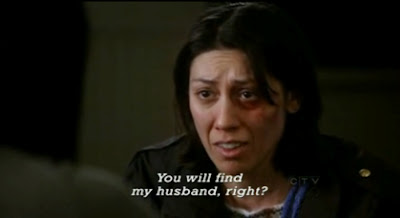 Don't worry, lady - the team has been staying a "head" of the investigation.
Womp womp.
Deputy Boyd (Mike Doyle) tells Ruiz that he's seen a sun mural in the desert, and offers to take her there.  Once they are alone, it becomes obvious that Boyd is the unsub, besides the fact that he's a crazypants, he also has a lame leg.  He and Ruiz have a gunfight. 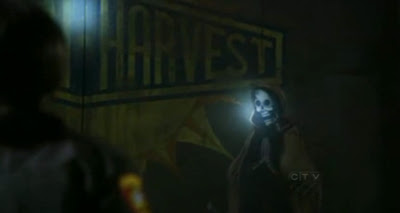 I can't believe that a food(?) company with a logo that combined both the sun and Santa Muerte would ever, ever go out of business.  Huh.
The BAU arrives at the police station to find everyone missing - they are all looking for Ruiz.  Boyd calls in the discovery (fancy that); Ruiz has been mutilated in the exact fashion that Morales outlined when he was interviewed.  Only a few people heard him talk about it...including Boyd. 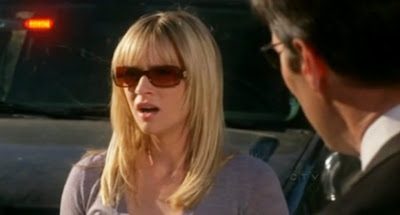 JJ: Oh, did he cut out her tongue, too?
HOTCH: Were you listening in on our private conversation?
JJ: Um...no?
Meanwhile, Boyd and Deputy Gentry (Alex Quijano) go to arrest Morales...or at least, Gentry thought they were arresting him.  Boyd shoots his way through Morales' shop, killing three people before gunning down Gentry and setting it up to look like one of the other victims killed him. 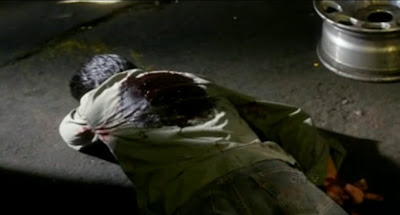 If you're going to frame a guy, maybe don't shoot him in the back with a totally different gun than what is readily available.  I'm just sayin'.
Prentiss calls to warn Gentry about Boyd, cluing Boyd into the fact that they are onto him.  He runs.  The team goes to Boyd's trailer, and find the burial sites for the bodies of the victims.  They also discover his attachment to the Golden Harvest - it was where his father was killed. 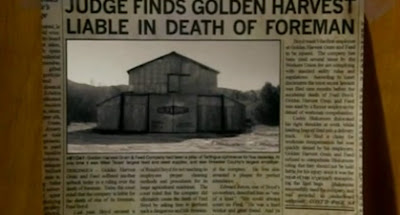 I keep my murderous and vengeful newspaper clippings pinned up at work, not at home.  This is just tacky.
They chase him to the Golden Harvest, and kill Boyd there (How many unsubs actually live on this show?  It's seriously like 1 in 10). 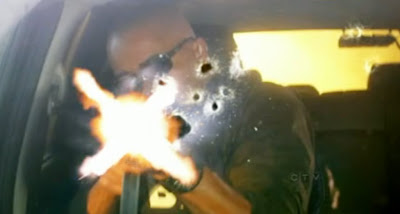 Apparently Morgan can't exert the energy it would take to lean out the window instead of just firing straight through the windshield.
Cue credits.
Posted by Amanda