KK Recaps and Gives You Your Opinion on V: S1E7 "John May" 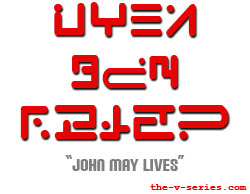 Episode 7, entitled "John May", curiously revolves around the 5th Column and their search for the semi-mythical John May and plans to rescue Georgie, who is still in captivity on the V Mother Ship.
Ryan (Morris Chestnut) believes that there is a way to communicate with the 5th Columnists on board the ship and that John May might still have the tool to do it. Seeing this as the best way to rescue Georgie, the gang heads upstate to where John May used to live. Kyle (Charles Measure) thinks Ryan is keeping secrets, and there is tension between the two men. 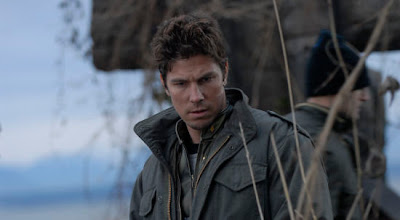 John May is convinced he sees aliens in the grass.

Once upstate, they find that John May's stepson (James) is living in the house with a girlfriend, who is conveniently a V plant. Still angry over his stepdad's apparent suicide, James is reluctant to help until he sees that his girlfriend is really an alien. The girl, not being briefed on Pac-10 football teams, unwittingly outs herself as a V and is summarily executed by Kyle. While all of this going on, it is revealed that John May didn't commit suicide nor is he in hiding. In fact, Ryan was sent by Anna to kill him a decade previous.
They search John May's things and find the communicator, but not before a V drone spots the team. They take care of the drone and get in touch with Georgie and the 5th Column doctor Joshua onboard the ship. Though he has yet to crack, Georgie can't take any more torture and the 5th Column doctor puts him out of his misery. With one secret off his chest, Ryan decides to come clean with Valerie. The problem is, she has already found all of his secret stash, including the images of her unborn alien-baby. She flees the apartment, presumably to sell the pictures to Weekly World News.
Meanwhile, Chad Decker has figured out that Anna's invitees to the Live Aboard Program are all somewhat marginalized citizens, none of them special in any way except for their various failures. Instead of taking this info to the resistance, Chad uses it to bribe Anna and they make a vague pact to help each other out. 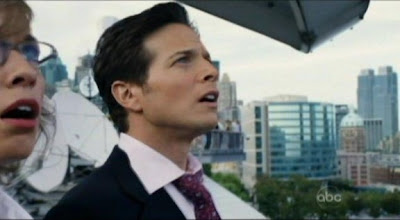 Chad Decker reacts to the news that he is the last journalist who fact-checks.
Tyler (Logan Huffman) and his dad (Joe, Nicholas Lea) are still hanging out, even though his girlfriend Lisa (Laura Vandervoort, damn Canadians) shows up and stays over. Obviously there to cause trouble, Lisa overhears Joe and Erica talking. They reveal in conversation that they split up because blood tests seem to prove that Joeis not Tyler's father. The skanky V (who looks about 40 and is obviously V's answer to Gabrielle Carteris circa 90210) tattles to Tyler, and there is much angst.On the mother ship, Anna is busy looking hot/reptilian and though she is a little pissed about the growing resistance, she gives birth to all her egg-baby soldiers and seems pretty smug (like a person who owns both a Mac and a Prius) and confident. 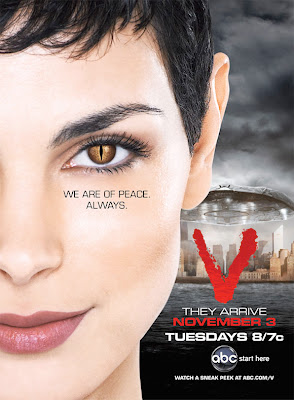 Face tats are big where she comes from.
It is very rare that I watch a show and like all the characters. Typically, there is someone who just rubs me the wrong way. Be it over-acting, cheesy lines or just a certain look, I am quite adept at finding something wrong with at least one actor. V is the exception to this rule. Though the Lisa character looks about two decades removed from high-school, she nevertheless plays a cunning and ruthless alien who is very believable in the role. 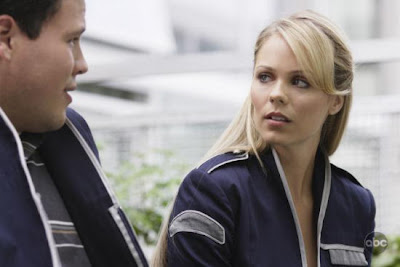 What a sneaky Canadian alien might look like.
Even the terrorist, Kyle, doesn't over-play his part. You often see the good/bad guy try and struggle with what he is doing so the viewer feels in the inner pain. Not this dude, he likes snapping necks and wearing too tight t-shirts. Though only problem I have here is that the most wanted terrorist in America is played by the whitest dude ever. I thought the IRA went out of fashion around the time Patriot Games came out?
The core group of resistance fighters are fantastic. Elizabeth Mitchell, Morris Chestnut and Joel Gretsch are very solid and Mitchell plays the heroine/mother role to a T. The V characters are well-cast and sufficiently creepy, but Scott Wolf in the Chad Decker role is my favorite. The ultimate skeevy reporter, Wolf can easily play both sides of this battle and not break a sweat.
A definite upgrade from the original V miniseries, this ABC program is fast becoming my one of my favorites and is about the only hour-long show I can sit through. If you haven't already, please do give it a look. Jonathan Frakes of Star Trek: TNG fame directed this episode and dig an excellent job! 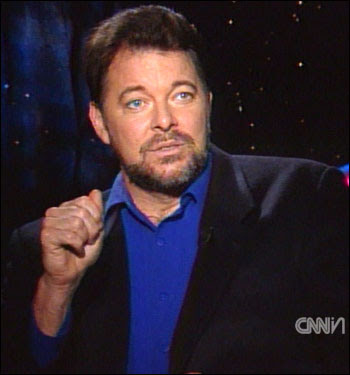