I have been avoiding reruns of this episode – not because it isn’t well-written or well-acted (which it is), but because it’s so disturbing and creepy that I can’t stop thinking about it after I’m finished with it. So, I wasn’t going to watch it again this week, but my sister actually sent me two casting anecdotes and I’ve been laughing at the second one all day (in fact, I’m going to put it somewhere inside this recap so you actually have to read it…or at least scroll down until you see the quotes text). So, fine. Here is Erica’s first quip:

One great story came from our killer:

So, you'll notice that she never really speaks. She mutters to herself in one scene, but other than that, she doesn't say anything. They wanted her to be of Eastern European descent, so that when she muttered, it would be in some sort of Slavic language. However, when we put out the auditions, we didn't know that - we just told the girls they'd be improvising a bit. So, on the day of the auditions, the girls came in the room and the director told them what he wanted to see from them... and that he wanted the improvisation to be in whatever their native language was (most were Russian, Ukranian, etc.). None of them had any problems with it because they were all fluent in some other language.

So, as the last girl came in, I was explaining to her what she was going to have to do and I told her that she would need to improvise in whatever language she spoke and she said, "Um, I don't speak another language." I asked her if she could do an accent, and she said, maybe. So, she comes in the room and she starts to do her thing and she ends up just saying one word in Russian, over and over again. But the emotion was fantastic. When she finished, she turned to the director and said, "I'm sorry - I really only know that one word, but I can learn quickly!" And he said, "It's ok. What does it mean?" And she said, "Well, um, it means 'asshole'." And believe it or not... that's the girl who got the job. :)

And now, onto the recap:


As a professor gives a lecture about the mind of a serial killer, the show opens with a teenager girl swimming in her backyard pool in Virginia and a mother pleading for the life of her young son, who is being held at gunpoint. Another little boy runs and hides in a closet, but is found by the gunman. As the girl swims, you see shots fired inside the house. Finally, the killer enters the pool, and drowns the girl. 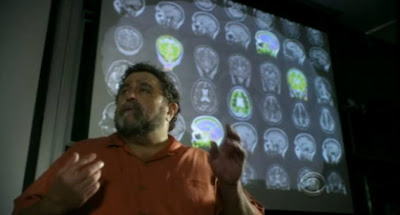 No wonder they are psychopaths. They have GREEN BRAAAAAAAAAAAAAAINS.
(Eh, that’s the best I’ve got today.)
The BAU arrives on the scene. Turns out, the father of the murdered family (who were found buried in the backyard) is serving in Iraq – which is the same situation of another family murdered earlier in the year in a similar manner. Detective Anne Hudson (Andrea Thompson) asks why they were buried. Morgan tells her that it means the killer was remorseful…and when she’s over being remorseful, she’ll kill again. 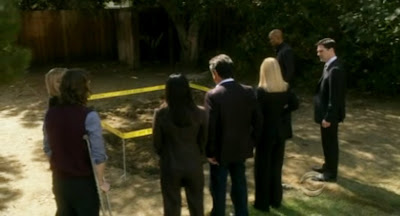 Wanna know a good cure for remorse? Not.killing.people.
Rossi and Hotch work out how the killer did the deed. They determine it was quick and efficient, with no signs of a struggle…except that in both cases, the teenage girl was suffocated. They aren’t sure why her death was more violent than the rest. The wife’s wedding ring is missing. They decide they have a single suspect. 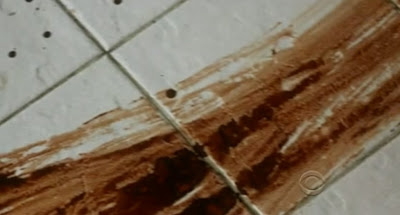 While CM often shoots on location around LA, they do some of the interiors (like the airplane and the BAU office) on a soundstage. They literally will construct a room that you see on the show, and then take it down and replace it with the next room for the next ep. We were there when they were building a living room. They had an unfinished banister and window in place, and were getting ready to paint the walls and lay carpet. All of the furniture was wrapped in plastic outside the door. The only thing that was completed in the room was a big splatter of blood on the ceiling. Apparently, the blood guy is enthusiastic.
A prison inmate has received two envelopes in the mail – one was filled with clippings of the two murders, and the other with a note saying, “Look at what I’ve done. Signed, An Admirer.” The prison inmate? Karl Arnold (Neal Jones) – aka “The Fox.” Karl also liked to kill families and take wedding rings, but Karl would hole them up and sexually assault them for a while before killing them in the basement one by one.

(Husky whisper) “We meet again, El Zorro.”
They bring Captain Downey (Neill Barry), the father/husband of the murdered family, in to tell him what has happened. 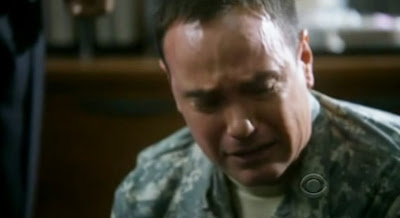 SEE? This is why I don’t like this episode. Boo hoo.
Okay, here is Erica’s other anecdote:

The funniest story is about the guy who played Garrett Pain (the guy in the prison who they say killed and raped however-many women...). All that guy had to do was bark like a dog at Prentiss, so they wanted a guy who looked scary/creepy. Scott and I found some of the scariest looking dudes we could find and when it came time for the auditions, I got a little nervous because I was going to be the one they were barking at and I just KNEW some of them would get right up in my face. We ended up reading 6 guys for it, some of who clearly were embarrassed to be barking like a dog at a girl, and some of who just went for it. The dude we hired not only "barked" at me, but he pretended he was licking the glass of the cell door (in my general direction). Fortunately, I know the actor well and know he's not actually a serial killer/rapist so I could shake that moment off, but at the time, it was one of the creepiest auditions we'd ever had.

And on a side note, the OTHER guy in the prison cell who screams something at Hotch and Prentiss as they walk past, is the guy who wrote the episode, Simon Mirren.

Hotch and Prentiss go to interview Karl. Hotch warns Prentiss that he will try and play mind games, and offers suggestions as to how to stay one step ahead of him. 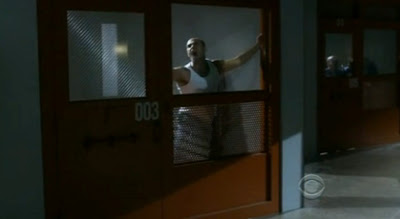 This is Simon Mirren. 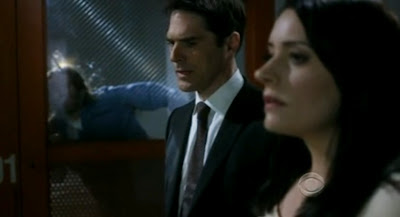 And this is Lorin McCraley, aka “The glass licker.”
Karl talks Hotch and Prentiss into showing him pictures of the dead children. Karl tells them that the unsub didn’t separate the children for control because s/he was going to kill them quickly. He also noted that the unsub left the fathers alive instead of “sparing them” in death. 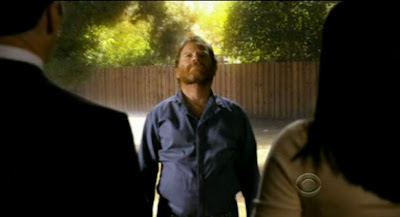 What a sweet little jaunt down (crazy psycho-killer) memory lane.
Meanwhile, a new family has been targeted by the unsub. A mother and her son return home to find her daughter being held at gunpoint by the killer. Fortunately, the mother carries a shotgun – and so she takes out the unsub, and they all live happily ever after. Hooray!
Just kidding. 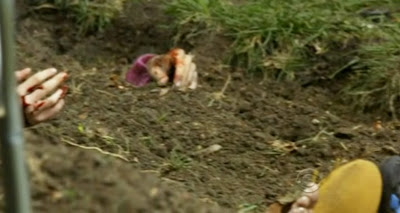 This episode is a real barrel of laughs.
Once again, the daughter was suffocated. The escalation between kills rules out remorse, and also indicates a major external stressor for the unsub. That stressor: an airshow at the nearby base.
Prentiss goes to meet with Karl again, and flirts with him to get him to tell her all of the horrible things he used to do to the children. She decides that he is filled with extreme self-hatred because of past abuse from his own father, and so he acted out his murders in order to “kill” his father. This leads Prentiss to figure out that these new killings are all about the girls – which means that the killer is a woman. 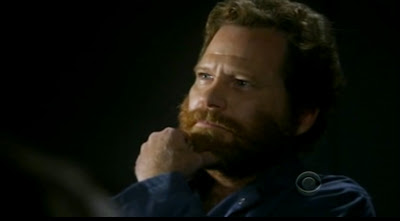 (PS – Karl’s real purpose in this episode is to set up Hotch for the 100th episode, just in case you missed it.  Plus, he's there for beard scratching.  Lots and lots of beard scratching.)
Dr. Reid examines the burial sites, and realizes that they look like mass graves. He compares that to the earlier lecture about serial killin’ neurons, and decides that the unsub must have been born in an area with conflict. 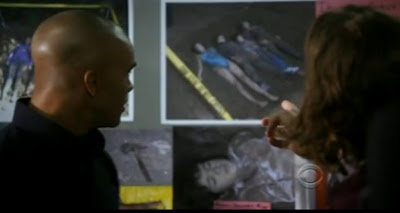 REID: Hey guys, what does this remind you of?
MORGAN: Your last pool party? Zing!
Garcia finds out that the killer has murdered before – overseas. She also determines that the serial killer is finding her victims through an internet photosharing website. 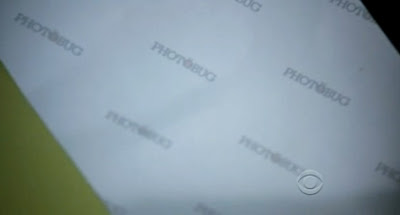 The moral of the story? Use a Polaroid camera.
The BAU realizes that the unsub was living in Srebrenica when she was 15 years old, and is reenacting the slaughters she saw there. To prove they are right, we see the unsub, Miranda (Kristina Klebe), freaking out over the airplanes flying overhead. 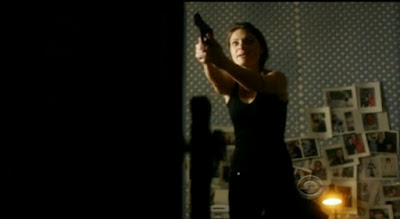 Why are all serial killers incapable of buying a bulletin board?
Thanks to the photosharing website, they find an employee who perfectly matches the unsub’s profile. They catch Miranda just as she’s about to kill another family, and Morgan shoots her after a fight. 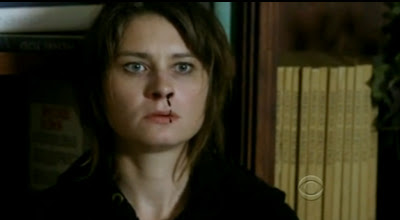 Ah, the old shot-in-the-stomach-bleedin’-out-the-nose trick.
Cue dramatic music, set up for the 100th, and roll credits.
Posted by Amanda