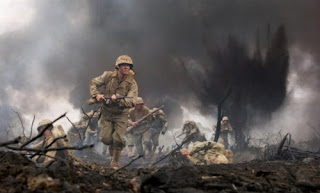 Episode 6 of The Pacific has Sledge, Leckie and the other boys of the 1st Marine Division still on Pelelieu. They have consolidated the gains they made the 1st day and are preparing to move across the airfield and eventually assault the hills, where the Japanese have holed up.
The battle promises to be bloody, and the entrenched Japanese are using their artillery to such effect that the Marines are not able to re-supply. Meaning, in short, that they are once again low on ammunition and water. In fact, much of the episode deals with the thirst the guys are feeling and how that is almost as bad as the enemy they are facing. 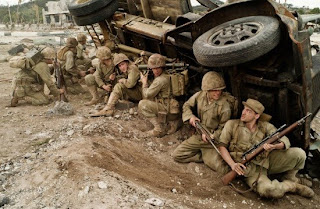 Sledge and Co. take cover under a Toyota with a faulty accelerator.

In the daytime assault across the open airfield, the division is severely bloodied. Many of Sledge's compatriots are hit, as is Leckie's friend. With no radio and several wounded, the officer in charge of Leckie's outfit sends him back towards American lines to get a corpsman and a radio. Leckie makes it back to the lines, but is knocked out and wounded by an artillery shell. So, we, the lucky viewers get to see more of the whiny Leckie moping around in a hospital gown.
Sledge and his mortar section, meanwhile, make it across the airfield but do lose one man. Sledge, despite looking like he has or is about to piss his pants, acquits himself well and is christened Sledgehammer. This coaxes a wee smile from him, but he quickly goes back to his pants-wetting face. 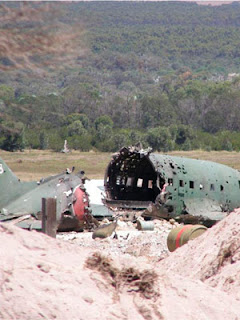 While the fight to secure the airfield was brutal, the soldiers know it will pale in comparison to the assault on the hills. Sledge's platoon is likely slated to be in the assault party, and his Captain (Ack-Ack) leads a small scouting party to ascertain just how bad it will be. They quickly find out that the hills are swarming with Japanese, and they have several well-fortified gun emplacements. Ack-Ack takes off for battalion to get the orders changed, and while he is gone the Marines are forced to club a fellow soldier to death because he was screaming in the night, threatening to expose the outfit to attack.
The episode concludes with Leckie and his pal onboard a hospital ship again, while Sledgehammer and his outfit gets ready to push on towards the hills.
After being somewhat critical of the mini-series thus far, I found myself really liking this episode. A few extra characters (Lt. "Hillbilly" Jones and Ack-Ack, for example) really brought some depth and interest to the story. I am still not a fan of Leckie, as his incessant whining really grates on a person. This isn't to catch aspersions on the man himself, but as played by James Badge Dale, it (the whining) comes across poorly.
Sledge, despite the pants-pissing look, really had a good episode. He earned himself a pretty sweet nickname, and managed to stay away from Leckie and the hospital ship of ennui. He witnessed the brutal murder? of one of his fellow soldiers and went from greenhorn to seasoned soldier overnight. Gary Sweet continues to provide some comic relief and grit as Sgt. "Gunny" Haney. 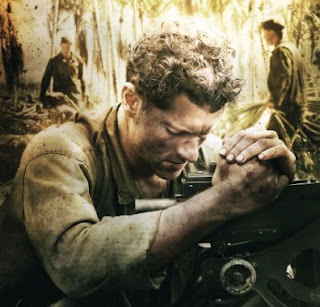 Leckie prays he can survive another 3 minutes of combat and get back to his hospital gown.
For the first time in the series, we are both actively looking forward to the next episode. I would imagine Sledgehammer sees some more action in the hills overlooking the airfield and Leckie will sullenly sip coffee on an island somewhere while entertaining nurses and superior officers with his sunny disposition.
See you back here next week for your opinion of Episode 7.
Posted by kanadienkyle