This Is Your Opinion on HOW TO MAKE IT IN AMERICA, Episode 5

With our DVR queue back to normal, Amanda and I were finally able to catch up on all of our back episodes of How to Make it in America. 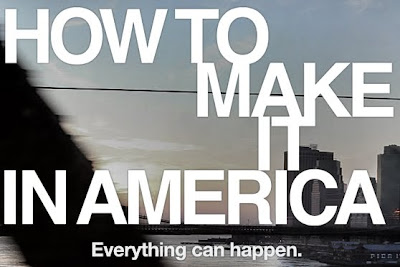 With the status-quo Episode 4 (Unhappy Birthday) out of the way, we were looking forward to Episode 5: Big in Japan and hoping that something would actually happen. Wonder no more reader, as Cam and Ben finally get their long awaited sample of their new Crisp jeans. The sample, however, turns out to be less-than-Crisp and looked like something you would find your nerdy uncle wearing. The waist went up to Ben's belly button and they featured the hot tapered leg look.

Cam, of course, took it all in stride, but Ben was back to his usual moody self. While on the mope-fest walk, the guys ran into a former acquaintance of Ben's who now has his own denim line. Over coffee, the friend agrees to set up a meeting with a Japanese buyer. The boys are back!
Meanwhile, Rene reappears and is on the hunt for some lucre he had stashed before he went to prison. He tracks down the cousin whose house he used as a hiding spot, only to find out that he has been kicked out by his wife and is now forbidden from re-entering the home. With the help of his grandmother, Rene gains access to the home and finds his money, predictably, gone.
Just in case you thought Rachel and Darre..zzzzzzzzzzzzzzzzzzzz...n wouldn't make it into the episode, rest easy my friends. Rachel had accepted a gift of cheese doodles from Ben in Episode 4, and now Darren was obsessing over them. In a fit of jealousy (a very small, unmanly fit) he decided to eat some. To soothe over their little tiff, Rachel offers some Darren some alfresco action, but he declines and counters with a suggestion that they both do some Ecstasy. Because, you know, when couples have a fight the best way to bridge the gap is to get high.
The night goes slightly awry when Darren starts making out with everyone on the dance floor, dudes included, and tells Rachel he loves her. This seriously tests Rachel's range of facial motion, but she does manage to go from "blank stare" to "mildly perplexed".
Despite having a little tiff of their own, Ben and Cam meet up again to show their sample to the Japanese buyer. The buyer isn't impressed with the jeans but does take a shine to Ben's t-shirt, which he had designed in high school, and orders 300. Crisp is back, baby!
Episode 5 was a return the formula that makes this show successful and entertaining. Ben and Cam on the hustle is what drives this show, and the juxtaposition with Rene (discussed here) keeps you rooting for them even when it looks like all is lost. Despite his oft-sullen demeanor, Ben is still very likable and I think every person wants to know a guy like Cam.
Rene's sub-plot has a sub-plot of its own, as Rene struggles to remain a legitimate businessman and not succumb to the pressure to return to criminal pursuits. Luis Guzman really does a masterful job with this character, thus providing some nice depth to this comedy-drama.
Neither Amanda or I have much interest in the Rachel-Darren storyline, though you can easily see Rachel being pushed away and drawn towards Ben. Darren's nice/stable guy shtick wears a little thin, and you glimpse his dark side when he is high on Ecstasy. I suppose this sub-plot is going somewhere, most likely to cause trouble for Ben, but the set-up feels too long to me (that's what she said).
In closing, I just want to note once again that the practice of having every episode end with a ray of hope peeking through is awesome. You really find yourself identifying closely with the characters, and this promise of something good about to happen does a wonderful job of pulling viewers back.
Posted by kanadienkyle