This is Your Opinion of THE PACIFIC: Episode 4

Having watched The Pacific with eager anticipation for the time when the series will have make the move from mediocre to awesome, I was stoked to get back from Texas and check out Episode 4. Naively, I believed that the Marines would be all fresh from screwing and drinking their way through Australia and be ready to fight the Japanese. 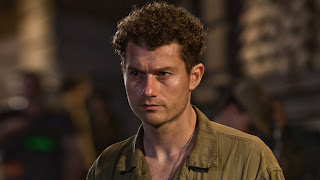 The only known photo of Leckie with mouth closed.
This is how my mind envisions the script for Episode 4:


Intro: 10 minutes of the opening title sequence and interviews with veterans.
Camera: Tight shot of Marines working a mortar.
Angry sergeant- Yell.
Young Marines look perplexed.
Camera: Pan in on Sledge. (Oh yeah, that sick kid with the bad heart). Fade out.
Fade in: Back in the South Pacific. Marines are on a boat. Leckie has his slacked-jawed look down. Writes a letter to Vera, apparently having forgot all about his Australian paramour.
Marines are dirty and its raining.