Episode 7: Peleliu Hills, much like Episode 6, is Sledge heavy. A welcome relief from the wall-to-wall Leckie that we had been subjected to from Episode 1 until now, E7 was the best to date. 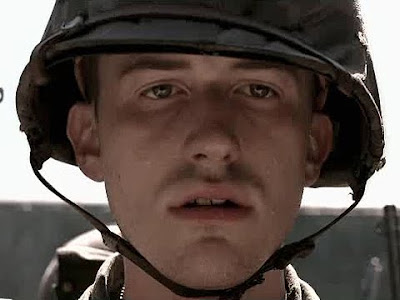 Ever the team player, Sledge does his best Leckie impression.

Still on Peleliu, the soldiers of the 1st Marines have secured the airfield are preparing to go into the hills to root out the stubborn Japanese who have holed up in a series of intricate caves. Sledge and his mortar team are once again in the thick of it, and they all know casualties will be very high.The guys get to see their compatriots coming back to the lines bedraggled and vacant. Sledgehammer and Co. know they are next, but take some solace in the fact that they have capable leadership in Captain Haldane and Lt. Hillbilly Jones, in addition to Gunny Haney.
The hills overlooking Peleleiu end up being even worse than they had imagined. The Japanese have bunkers and holes everywhere, and even in supposed safe zones there are still Japanese lurking in the shadows. This constant state of fear wears heavily on the men, and they are forced to endure another friendly-fire incident.
As the Marines probe deeper and deeper into the hills, the casualties pile up. Lt. Jones is killed, and Sledge and his mortar-mates are the stretcher bearers who have to pull him out. Gunny Haney finally snaps, and Captain Haldane is killed by a sniper the next day. A grim reality for these men, to say the least. 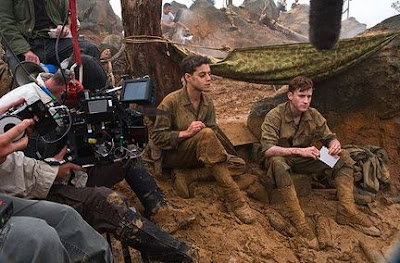 Sledge and Shelton worry that the cameras will give away their position.
Meanwhile, back in the United States, Sgt. Basilone hits some golf balls and practices his brooding look. That is not to say he doesn't pay the price, as he gets several self-inflicted blisters at the driving range. Quel dommage! 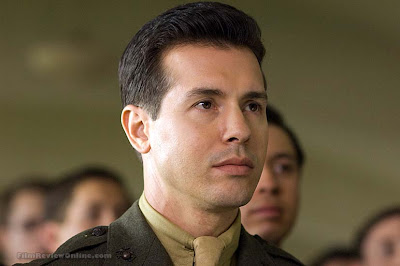 Basilone prepares to receive his Purple Heart for golf-related wounds.

Driving range scene aside, this episode was really quite well done. Sledge, as played by Joseph Mazzelo, handles the formidable task of appearing frightened and resolute at the same time very well. Rami Malek, as Merriell Shelton, continues to be one of the strongest members of the cast and the story is moving along at a better pace. The scenes featuring Basilone back in the United States are completely useless, but since the series insists on having a ton of characters we keep him in mind for when he comes back in Episode 8. 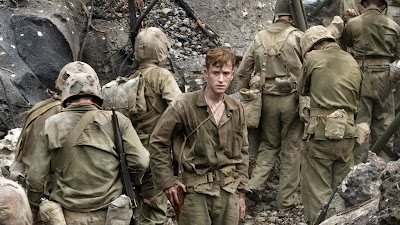 From the Abercrombie and Fitch: Summer 1944 Catalogue
The sets and locations really stood out in Episode 7. The hills and battle debris all look fantastic, as do the literally scores of dead Japanese that are strewn about everywhere. The one scene where where Shelton throws stones into a dead man's exposed brain was really something to see. While watching the episode, we were wondering out loud how these men are cast. Do the casting agents look for young Asian men who excelled at freeze tag when they were young? Are the auditions just them laying around oozing blood? If anyone knows, please fill us in.
Its tough to have Capt. Haldane and Hillbilly gone, but the trade off here is that Leckie is nowhere to be found. We assume he is back convalescing again, but we were thankfully not subjected to his slack jawed routine this Sunday.
So, it would appear that HBO has hooked us for at least one more week. We get Basilone back and that alone should make for a good episode 8. See you next week.
Posted by kanadienkyle