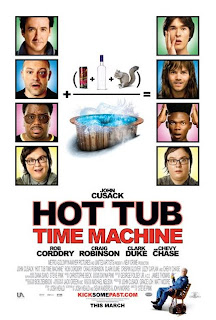 If you haven't already worked out the premise from the previews, here is what happens: John Cusack, Craig Robinson and Rob Corddry are all unhappy 40-somethings.  Cusack's girlfriend/wife has just moved out, leaving him alone with his geeky-basement-dwelling nephew, played by Clark Duke.  Craig Robinson is an unrealized musician with a cheating wife and an excrement-filled job at a dog groomer.  Rob Corddry is the worst off of the bunch - an alcoholic and an asshole, he decides to end it all with a bottle of Jack and an exhaust-filled garage.  Except that he doesn't succeed, and so his doctor calls on his semi-friends to keep an eye on him for the weekend to make sure that he doesn't, you know, kill himself again.  And so all four adventure to the now-decrepit-but-once-rockin' ski resort that was home to Winterfest '86, get into a glowing hot tub, and go back in time.  Hilarity ensues.
Here's what I liked:
Here's what I didn't like (and there's only one thing):
When we walked out of the movie, there was a 20-year old kid and his girlfriend in front of us.  She asked what he thought of the film.  His response?  "I didn't get it."  I'm not sure what there was to get (seriously, I'm concerned about today's youth), but this movie might only appeal to those of us who actually experienced the 80s, and not just learned about it from VH1.  So, if you fit into that category, dust off your Jams and go see Hot Tub Time Machine.
Posted by Amanda