Once again, I'm late on my CM post.  To make up for it, two casting stories from my sister (plus hooray that the spinoff was picked up!):

One of the victims (we never see her alive) is a school teacher named Dedaimia. Yes, read that again... Dedaimia. Remember how I told you that our writers name their characters after their friends? This particular writer is also the one who created Erika Silverman, named after yours truly. Well, he apparently had a teacher back home in Indiana whose name was Dedaimia. It sounds made up but it's not and it was obviously important to him that this unseen victim have that name. And even though we never see her, one of the other characters refers to her. So, all these women who came in for the OTHER school teacher (who ended up with the name "Miss Brown") all walked in and said, "Um, is this name... Dead-a-mia? Da-daimi-a?" And every time, our writer would sigh and say, "It's De-day-mia." And after awhile, our producer started to give him hell for it, but he stuck to his guns and named that faceless victim after his friend. :)

The other story is of our teaser victim (Brenda Bright is the character name). You know how I told you that birth and death scenes are the most awkward scenes to audition? Here's a perfect example of an awkward death scene: that audition scene consisted of a conversation with her pal, then her walking by herself and hearing something, then getting scared, then running away, then bumping into our killer thinking it's just her friend, then getting stabbed by said friend, then dying slowly as he pushes the arrow further into her gut. This type of scene is every actor's nightmare because so much of it is stage direction. They have to "fake run," take a "stab" to the gut, and then react as the weapon is "plunged deeper" into their gut and then they have to "die." So these women were coming in, wondering how "active" they had to be - we audition in a huge conference room... technically, they had space to move around/run/fall/etc but it's difficult to really stay in the moment when you're thinking more about your blocking (ie, running in literal circles). So, after watching a few of them very awkwardly run in place, we had these women essentially just breathe themselves into hysteria/fear (they just mimicked the heavy breathing you'd get from running) and then I'd step in front of them as their "friend" and then, from 5 feet away (that's about how far I stand from the actors), I "thrust" my arrow into their gut (ie I thrust my fist into the air, several feet in front of their actual gut) and then after their next line, gave my "arrow" a twist so they could react for their final line before they died. Awkward, no?

That second story is the perfect segway into the recap.  PS - This was a great episode, and it gives me a chance to make fun of how the television and movie industry portrays places that are not LA or NYC.
We find ourselves in Franklin, Alaska where two fishermenpeople are packing up for the night.  Brenda (Kimberly Estrada) opts to stay behind to finish cleaning her fish, and so the gentleman, Keith (Robert Dolan) leaves her alone.  She hears a noise and becomes frightened.  She drops her fish and takes off, running into a hooded man that you don't see.  She acknowledges that she knows him just before he stabs her in the stomach with an arrow (for a more detailed description, read Erica's anecdote above).  Back at home, the  killer licks the bloody arrow. 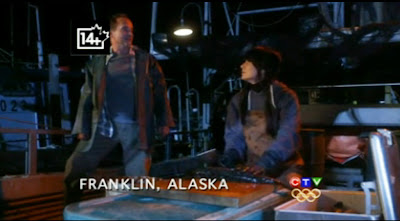 You may be asking yourself: if it's warm enough for only a sweatshirt at night, should it be dark in Alaska?  Nopers.  But fortunately, Frazier Park, California exists so that when women can be assaulted under the cover of night and not under the less-dramatic-but-geographically-correct sun.
The BAU girls have a little coffee and shopping gossip session before heading to the frosty north.  This has no connection to the storyline, but I love Paget's delivery in this scene and so I wanted to put it in. 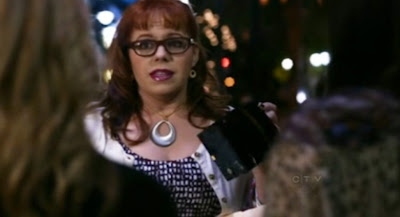 By the way, Kirsten is currently in the play "Taking Chances" in Los Ang if you're in the area.  This also does not further the storyline, but it's my blog and I'll put what I want on it.
There are three victims in this town of 1,400 and it's their first murder investigation on record.  There's a new victim every two days.  There are different kill methods - the first two were shot, and Brenda was stabbed.  They only know they are connected because they were all found in "heavily"-trafficked areas.  The man was left out in the open, but the women were buried under piles of trash. 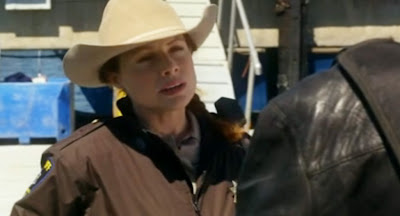 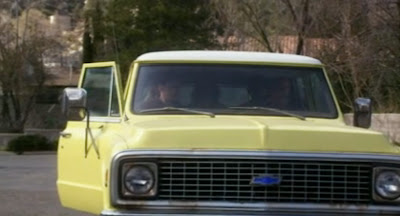 Whenever TV shows feature North Dakota, they always put our sheriffs in cowboy hats and old crappy trucks, too.  I'm surprised she doesn't have a one-eyed dog named Blue.
Doc Johnson (no joke), the Medical Examiner (David Carpenter), has found human urine on one of the remains. This is a hunting technique to keep animals away. The first victim was shot several times, with most of the shots missing or grazing him.  The second victim was only shot once.  Reid and Rossi (I heart you, Joe) decide that the murderer wasn't sure about killing his first victim - in fact, it may have been an accident.  But he liked the rush so much that he has perfected his technique in order to get it right.  We also learn that the Sheriff's Department has had to cover up the victims' blood trails with dirt because a bear has been attacking small animals in the woods. 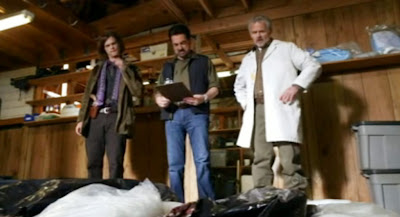 DR. REID: "How did you know Brenda was stabbed and not shot?"
DOC J: "Well, there was an upward thrust motion that would have been difficult with a gun.  Plus, it was a STAB wound."
The team comes across Craig (Steven Montfort), who is preparing his boat in order to leave Alaska and escape the killings.  Meanwhile, Garcia makes friends with the innkeeper's son, Josh, (Eric Ladin) and tells him that she doesn't carry a gun.  She tells him that she knows all about everyone in town, and gives him a rundown on himself - including the fact that he moved back to town right before the killings started.

Here's a bit of gossip.  Nicholas Brendon, who plays Garcia's boyfriend, recently checked himself into rehab.
Garcia's communication system goes down, and so she ventures out to give it a reboot.  Unfortunately for her, she is in the wrong place at the wrong time, and sees poor Craig become victim number four. 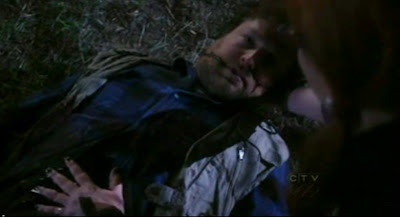 The spot she's pressing on his stomach is where his spleen used to be.  Can you live without a spleen?  You can...but he can't.
The killer has now sped up his schedule, probably because Craig was so adamant to leave.  He was killed with a hunting knife and dragged to the inn so that the BAU would find him.  As they discuss this latest murder, you see the killer sit down to eat the victim's spleen.  We learn from Dr. Reid that this type of behavior means that the killer wants to keep the victim with him because he is a freaking wackjob has severe abandonment issues. 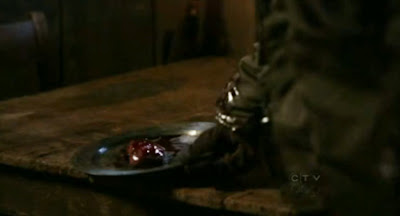 This isn't going to do much for Alaska's tourism.
They issue the profile: the killer is a 20-something, local man with excellent hunting skills who has been abandoned by someone close to him.  They arrest just about everyone in town.  The local teacher also pinpoints Josh as a kid who likes hunting more than the average guy.  They pick him up, too. Garcia comes to his defense because he knew she didn't carry a weapon and wouldn't have run away from her otherwise. 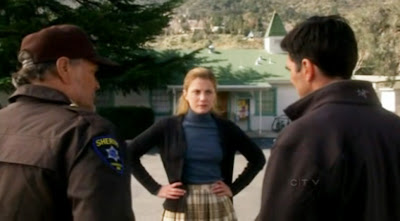 The school apparently only has one teacher, who is wearing a brown plaid skirt, black sweater, and navy turtleneck.  The moral of the story?  Alaskans lack qualified educators and fashion sense.
The connecting feature between all of the victims is that they were all moving out of town.  They locate another escapee, Kat Allen (Natasha Simsey), a pregnant waitress.  They take her to safety.
With all of the plausible-but-incorrectly-selected suspects in custody and Kat secreted away, the real killer strikes again. This time, it's the innkeeper/Josh's mother (Dale Dickey). 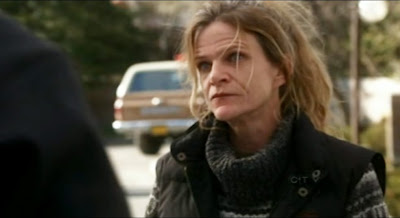 Norman Bates, meet the second-creepiest innkeeper of all time.  I thought she was the unsub.  I still kind of think she's the unsub.
This was a personal attack.  The innkeeper's intestines were splayed all over and the blood on her face was smeared, not splattered.  They tell Josh that is mother has been killed, and they ask for his help, since the murders obviously involve him.  He tells them he doesn't know anything and leaves quickly.  The team decides that he's going to try and take justice into his own hands. 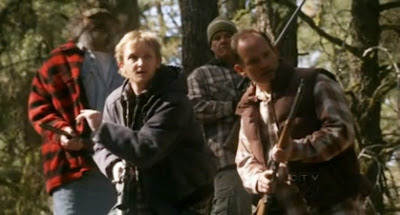 JOSH: "I need to round up a hunting party.  I'll take Billy Joe, Billy Bob, and the homeless guy with the red flannel that eats dirty socks off of Route 9."
They look over the details and determine that the mutilated animals from earlier were not from a bear attack, but from a person.  Their profile was incorrect - the killer is actually a teenage boy.  Turns out, Josh had taken an abused boy named Owen (Mark Young) under his wing before he left for college.  They go to Owen's house, and his mother tells him where to find him. 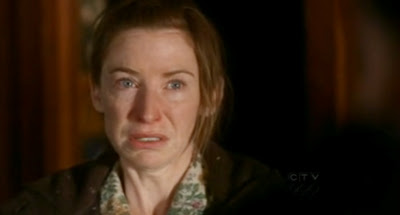 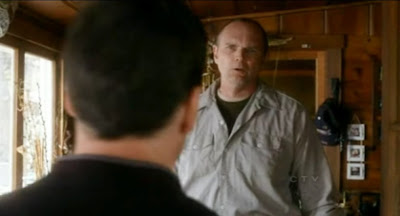 Seriously, everyone in this town looks like a murderin' psychopath.  Happy Town, I've found your cast.
Both the BAU and Joshua's gang are now hunting Owen.  They chase him to the docks, and end up shooting Josh so that he doesn't kill Owen.  Cue harmonica music, and we're out. 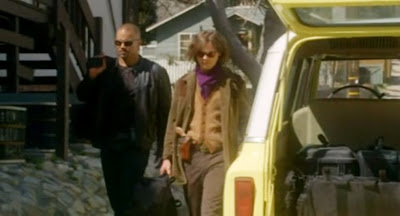 A six-shooter and a purple scarf.  Sigh.
Posted by Amanda