Wrapping Up The Pacific

Well, its over. Sledge and Lecke won the war in the Pacific and can go back home. While its true that our boys did personally bring Imperial Japan to its knees (Lecke with his whining and Sledge with his own brand of unhinged warfare), your connection has to last just a little longer while I recap and review Episodes Nine and Ten. 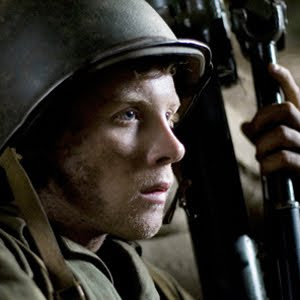 How long is this review going to be?

Episode Nine (Okinawa) sees the men of the 1st Marine Division, including Sledgehammer and pals, on the Japanese island of Okinawa. This legendary battle was one fought at close quarters against a fanatical enemy defending his home soil, with the added problems of heat, lack of water and civilians to deal with.
As the battle progresses, Sledge becomes increasingly more bloodthirsty (which isn't the exact right word, but you get the idea). He sees countless Japanese atrocities, witnesses civilians killed in the crossfire and loses more friends in combat. Though Shelton tries to keep Sledge centered, you can see him slip further and further away. Sledge appears to go over the edge when he has a powerful encounter with a dying Okinawan woman in a house he ordered shelled. 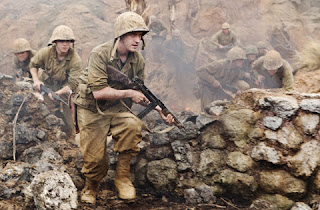 The episode does offer some interesting juxtaposition, in that Shelton does not seem to be affected in the same way Sledge has been. Despite seeing identical action, Shelton retains a relatively calm veneer and good, if somewhat macabre, outlook on life.
E9 ends with word that the United States has dropped atomic bombs on Hiroshima and Nagasaki, ending the war. Sledge, Shelton and Burgin enjoy some quiet contemplation with a bottle of the finest booze they can scrounge up and talk about going home.
Episode Ten, entitled "Home", reintroduces us to Robert Leckie, who has made his way back to the US only to be treated as a bit of a nuisance by his family. I am not one for hugs or any other outward displays of affection, but these people seem mighty cold to me. Despite the lukewarm welcome, Leckie sets out to get a job and a girl. The job being his old newspaper gig and the girl is Vera, the neighbour he ran into at church in Episode 1. You know, the chick he was writing too while sticking his shrimp in that Australian barbie.
Leckie settles into more or less a comfortable life with his family and new gal. They talk about televisions and...well, thats about it. Leckie is all set. Sledge and Shelton, meanwhile, got stuck in Japan for a few months and finally make it back to the United States in 1946. We see them taking the train from California west, and they have some good times hitting on broads until they finally have to drop Burgin off. Leaving just Shelton and Sledge on board, they reflect a little bit on their experiences until the train hits Louisiana and Shelton leaves a sleeping Sledge, without so much as a goodbye. Interestingly, Shelton didn't speak to any of his comrades again until the 1980's. 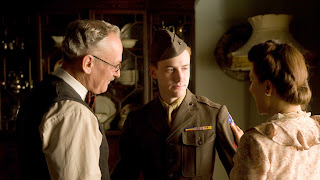 Sledge receives a comforting pat on the arm after 2 years of war.

Back home in Alabama, Sledge has a difficult time making the adjustment to civilian life. His father, a physician who treated WW1 soldiers, is very understanding and gives him plenty of room. Sledge makes an attempt to go to college, but nearly bites the head off of the registrar girl and simply retreats home afterwords. Though his friend Sidney is already back in town, Sledge still cannot make a quick transition. I found these scenes especially compelling because you don't often hear much about soldiers having difficulty adjusting after WW2. The Allies had won the war and the exuberant mood seems to have overshadowed the continuing costs the war had on many soldiers.
E10 also gives us a quick glimpse at John Basilone's widow and family, who are still dealing with his death on Iwo Jima. They share a tearful meeting/reunion in what was a pretty touching scene.
The series ends with a contented looking Sledge, holding a flower in a meadow. Perhaps to show the ongoing change from trained killer to peaceful civilian. 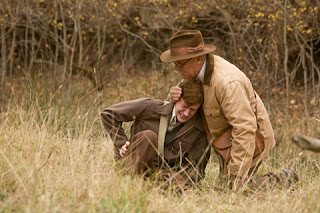 Mazzello reacts to the news that he was passed over for Jurassic Park 5.
Though The Pacific had a very uneven start, and was somewhat difficult to follow (character wise) in the early going, I felt that it had a strong finish. With Leckie off recuperating, the series was able to focus on Sledge and Shelton (who somewhat stole the show for me) and thus the audience was better able to form an attachment to the characters.
Visually, the entire series was fantastic. The grim realities of the Pacific theater were captured, and even viewing on television you had a small idea of the frightening closeness at which this war was fought.
Save for James Badge Dale, we liked all the actors and thought that even the bit players did a bang up job. This is not to say that Dale is bad actor, only that his portrayal of Robert Leckie seemed a little too over the top for our taste. It was like he was trying to portray one of those overwrought Gen-X'ers in an early 1990's angst-ridden movie (likely co-starring Ethan Hawke).
Our only other complaint was the extra long title sequence and the moralizing Tom Hanks did in articles pertaining to the show. Despite Hanks' ramblings on WW2 being about race and differences, the series did a good job of honestly detailing the horrible acts the Japanese were committing and portraying the very real hatred some soldiers felt towards the enemy.
So, now that NW Europe and the Pacific are out of the way, can we hope for a 10-part series on the Italian campaign? North Africa? Lets hope so. Well done, HBO.
Posted by kanadienkyle