Seriously, Judy Greer is in everything.  Click here to see some of her recent past performances. This week she's double-stuffing CBS, first on The Big Bang Theory and later on How I Met Your Mother.
Wanna know why she's always on TV?  Because she's hilarious.  On The Big Bang Theory, she played Dr. Elizabeth Plimpton, a genius horn dog with role playing desires.  After she beds Leonard, she does her best to wrangle a sexy four-way with Raj, Howard and Leonard...but only ends up with Raj after Leonard reminds them that "We'd be naked in front of each other." 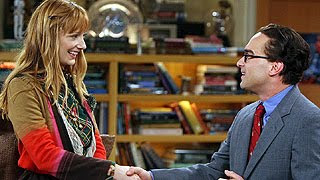