Can LEGEND OF THE SEEKER Be Saved? 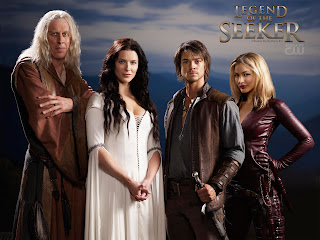 Much to the chagrin of its fans (present company included), Legend of the Seeker was canceled last month after the conclusion of its second season.  Not able to imagine a world without a Mord-Sith or a Confessor, the LoTS fans have kicked their show-saving efforts into high gear, firing off thousands of letters, purchasing a number of advertisements, and collecting DVDs for local libraries.  You can read more about it here.
So, this begs the question - is the effort worth it?  Can a canceled show be saved?  And the answer is...of course!  To name a few:
Posted by Amanda

Email ThisBlogThis!Share to TwitterShare to FacebookShare to Pinterest
Labels: Legend of the Seeker, Mrs. Amanda, Save Our Seeker