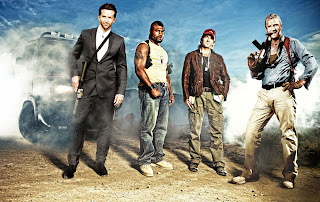 Also available for bar mitzvahs!
"...if no one else can help you, and if you can find them, maybe you can hire The A-Team".
So began one of the greatest shows of my childhood. Half shoot 'em up and half buddy comedy, the tv show brought together George Peppard with Mr. T and threw in Dirk Benedict and Dwight Shultz to form a quartet of slightly crazy ass-kickers who never really hurt anyone. Explosions, gun fights, Mr. T and Face, plus the irascible Howlin' Mad Murdoch. How could you go wrong? 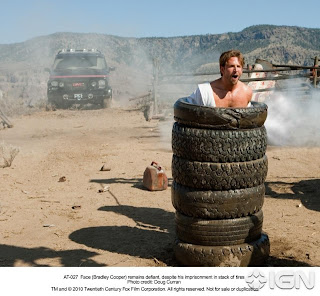 Bradley Cooper looks tired after a long day on-set.
With fond memories in my heart, I was pretty, pretty, pretty excited to see the movie incarnation of the beloved series, and figured the casting looked pretty strong. I have been a big fan of Sharlto Copley since District 9, and Liam Neeson is always quite good. Its not difficult to get AK to anything showing Bradley Cooper, and I was interested to see how Rampage Jackson would do.

So, you ask, how the heck was the movie? Much better than you would expect, actually. The previews for this film were cringe-inducing and I was considering skipping the movie altogether just based on that. However, given that there are relatively few decent pictures available, I went anyways and was pleasantly surprised.

The movie provides a little bit of back-story on how the four main characters all meet, and nicely ties in the current war on terror to the plot line. It has the now somewhat typical tendency to make the CIA the bad guys, and to showcase a thinly veiled version of Blackwater as the badder guys, but the film is mercifully light on any political messages. 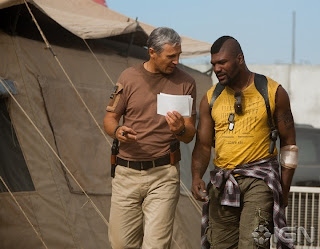 Now say it after me, "I pity the fool"
Acting wise, I felt Copley really stole the show as Murdoch. The character, being insane and all, obviously has a lot more comedic opportunities, but Copley managed to put his own stamp on the role and provided a good dose of humour when needed. Neeson is obviously a very good actor. He inhabited the role made famous by George Peppard and gave just enough homage to make the transition seamless, and did it all without looking like he was slumming. Cooper is a star on the rise, and was the right choice for the role. Able to look believable as a charming ladies man or military ass-kicker, Cooper did the role justice and then some. Jackson, being a little light on the experience, did a decent job with what he was given, but the writers seemed to have him repeating lines (either Hell No or Hell Yeah) every other sentence.

Acting aside, The A-Team had all the elements of a good shoot-em-up. Several explosions, some good chases, high-tech gadgets and some rowdy boy humour. The final scene was a little too reminiscent of a scene in The Losers, but all in all you couldn't really ask for more in a PG-13 movie. 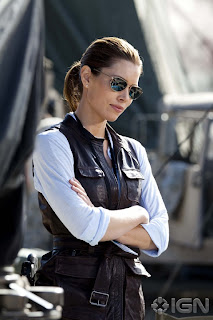 Jessica Biel stops to ponder why she is even in the movie.
The plot is a little thin, Jessica Biel is completely unnecessary and the movie has perhaps a few too many over-the-top action sequences (using the main gun on a tank to slow the descent of said tank?). That said, A-Team was a better-than-average summer popcorn flick that can and will keep you entertained, provide a few laughs and makes sure the good guys prevail in the end. They were faithful enough to the original (Hannibal uses a Mini-14!) to keep me happy, and they dispensed with the poor shooting (Storm trooper bad) that made the tv show look bad and in doing so came out with a movie you should see!

3 out of 4 Handies.
Posted by kanadienkyle