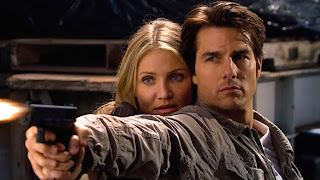 I had forgotten how much I liked Tom Cruise.  Like Mission: Impossible, Knight and Day is Tom at his best: confident, charming, and funny.  The story is tight, Cameron Diaz is entertaining (and not as ditzy as I expected her to play, thank goodness), and the action sequences are short and full of explosions.  To get to the point immediately in this review, I really dug this movie and I would see it again.
If, for some reason you haven't clicked away because you already have the gist of what I thought, here's my slightly-more extended version:

The movie opens with Jane (Cameron Diaz) checking into the airport while Roy (Tom Cruise) checks her out.  They bump into each other a few times before she boards a plane to Boston - a plane with only a handful of people on it (even though they told her it was full), including Roy.  Turns out, Roy is a rogue secret agent who is in possession of Zephyr, a super-battery that he is protecting from a dirty double-agent played by Peter Sarsgaard.  Now that Jane knows about the Zephyr, it's up to Roy to keep her alive while he goes after Fitzgerald (Peter Sarsgaard).
Here's what I liked:
We saw the 7:00pm showing on Friday with 20 or so couples all over the age of 60.  It was an unexpected group, to say the least, especially when the two old ladies in front of us started cat-calling every time Tom walked on screen.  I'm sure that you've heard that this movie has had a slow start at the box office, and I think our audience tonight was a good example of why this is happening.  To say it bluntly, grownups (especially elderly grownups) don't run to the theater on opening night.  Knight and Day isn't Twilight - even with a PG-13 rating, very little (if any) swearing, and nothing sexier than a kiss, this is a movie for adults.  As much as I dug The A-Team, this movie was very different from that one.  This ain't no fratboy film - it's grown-up action and smart humor.
They released Knight and Day on Wednesday so that it wouldn't compete with The Grown-Ups (I throw up in my mouth every time I see that preview, by the way - what happened to the days when Adam Sandler was funny?).  If you're honestly trying to decide between to the two, spend your money wisely on Knight and Day.
Posted by Amanda