KK Reviews GET HIM TO THE GREEK 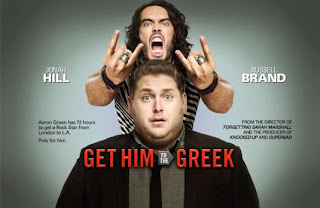 Get Him to the Greek, the new-ish Russell Brand-Jonah Hill vehicle, is ostensibly a sequel to 2008's Forgetting Sarah Marshall. That film featured Brand and Hill in supporting roles that were quite funny, and in Brand's case, star-making.
Greek stars the aforementioned Hill as Aaron Green, a lowly record company executive who is given his big chance by producer Sergio Roma (P.Diddy). The problem is that his chance involves getting notoriously rowdy (and down on his luck) rock star Aldous Snow to Los Angeles from London in 72 hours. Oh, and PS, Snow has been on a multi-year drugs and booze bender since the breakup of his union with girlfriend Jackie (Rose Byrne) and the demise of his career after a poorly thought out tribute to African children. 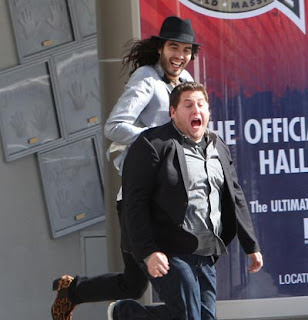 No, this isn't Katy Perry!
Just prior to leaving for merry-old England, Aaron meets with his doctor-in-residence girlfriend Daphne (Elisabeth Moss) to share the news, and she promptly informs him they are moving to Seattle, a move this fledgling music man considers a death-knell to his career. So Aaron sets off for England thinking he is a single dude.
Upon arriving in England, Aaron finds Snow and his enablers not packed for America, but ready to hit the town. Aaron reluctantly goes along despite the fact that Aldous is expected on the Today Show the very next morning and Sergio is calling incessantly. Aaron overindulges a little and the guys miss all the evening flights to NYC, but do manage to make the flight the next day. In an effort to keep Aldous sober for the show, Aaron drinks all the liquor and consumes all the drugs Aldous has with him and subsequently shows up at the Today Show looking a little worsefor wear.
While Aaron and Snow grow a little closer in NYC (Green gets Snow to play an old hit rather than his newer rubbish), the party continues unabated as Snow decides that they will stop off in Las Vegas to visit his estranged father. They sleep off the party at Aldous' apartment, where the rocker gets a little misty eyed about his ex-girlfriend Jackie. The guys get ready to head for the airport, but Aldous has to make a quick stop off to get some heroin, which he asks Aaron to hide (ahem, rectally) at the airport.
By the time the guys arrive in Nevada, Aaron is a little stressed and the boys have a spat. Aldous freaks out and demands that Aaron gets him so more heroin, and what follows is an oddly placed but nevertheless hilarious scene that features a stabbing. Thanks T.J. Miller! 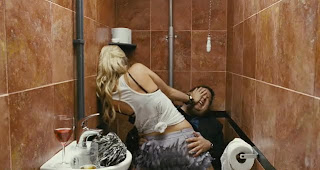 This is the last time this broad took Metamucil.
Though the attempted drug-buy didn't go well, Aldous and Aaron make up and go to meet Aldous' dad. The pair are supposed to be in LA already, and Sergio shows up to assess the problem and vows to party Aldous into submission. Predictably, more hi-jinks occur and we are treated to a bizarre but funny wall-petting incident. Strange stuff for sure. 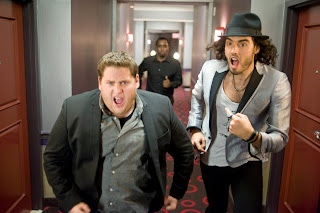 
The day of the comeback concert dawns and the guys have made it to LA, but not without a falling out. Aldous goes to visit Jackie, and they have a brief reunion followed by a permanent break-up when Jackie tells him their son isn't actually Aldous'. Aaron goes home to beg the forgiveness of Daphne, but she really isn't buying into it. Cue the arrival of Aldous, who proposes a three-way to smooth things over. Naturally, this doesn't go well at all and Aaron throws Aldous out.
With the pain of the last couple days (the deadbeat Dad, Jackie troubles and the paternity revelation) Aldous goes a little off the deep end. Aaron eventually rides into the rescue, and the concert goes off with a bang. Fast forward a while and we see a successful Aaron now managing Aldous and the rocker is back on top. Aaron and Daphne have made up and all is well.
FIN.
I went to see Greek expecting a Judd Apatow-type romp with some silliness and a few laughs. What I saw was a film with some titters and tee-hees, but not the big laughs you would generally expect. This is not to say that the film isn't a good one, its just that it takes you in a different direction than you might expect. 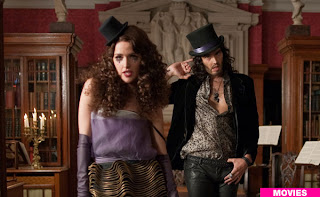 Aldous finger-blasts his ear.
For one thing, its a little deeper than you might expect. Though slightly cliched, the portrayal of Aldous as a famous-but-lonely rocker comes off pretty well, despite the fact that Brand can be somewhat unlikeable at times. He played the part well and played it in a fashion that made me like him, no easy job that. The Brit comedian showed pretty deft acting skills to go along with his comic timing, and really seems to fit into the Snow character like a glove.
I was a little disappointed in Hill, and felt that Greek was far from his best work. Typically a happy-go-lucky guy, Hill seemed to have trouble inhabiting the role of a stressed out guy with girlfriend troubles. Not really a straight-man type, the chemistry with Brand seemed a little off and the party scenes weren't a good fit either. Hill is still a likable and bankable actor, but I think he might have been better off if his character was the same one he played in Forgetting Sarah Marshall. The waiter/aspiring music-executive was a better role for him.
Characters aside, the story here was generally good. The cliches were present, but not overt enough to be bothersome. What really did the trick for me were the fake music videos(Jackie Q for the win!) and repeated cameos, especially the appearance of Rick Schroeder. Completely unexpected and definitely worth it. I would be remiss if I didn't mention the fact that virtually none of what appears in previews made it to the actual movie. I realize this happens often with a few scenes, but Greek basically did a wholesale switcheroo. I am not sure of the actual effect on the movie, but the missing scenes were quite funny in the preview, so I am little perplexed.
All told, I was and am a fan of this film. Others (Amanda...) weren't as taken with it, but I liked it then and I like it now, even after thinking about it for 72 hours. I would recommend seeing it even if you aren't a fan of Brand and Hill. The supporting cast, most notably Rose Byrne as Jackie, really help to make the movie, and I think everyone can find something to like about it.
2.5 movie theatre handies.