I think I'm officially too old for the MTV Movie Awards.  Truth be told, though, I'm pretty sure that 90% of the audience (excluding the Twilight cast and Zac Efron) were past viewing prime.  How did I know that I was too old?  Even with the incessant swearing, the bright, flashing lights, the hot teeny-bopper stars, I was bored.  Here's the benchmark: if you joined in when Peter Facinelli sang the now-retired MTV theme song, this year's awards show was probably not for you. 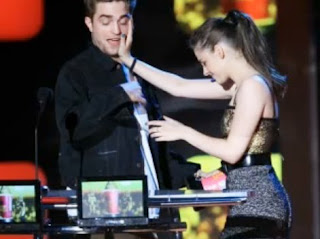 If this photo doesn't make your panties moist, you're too old for the MTV Movie Awards.

Regardless, here is what I thought: