We just finished up a long weekend in the United States, which meant that I had an entire extra day to catch up on my tv watching.  I was flipping around on Sunday morning (instead of taking a nice bike ride or doing something productive) when I came across Van Wilder - specifically, the scene where the nerdy fraternity pays Van to throw them a non-nerd party.  At said party, two of the geeks are playing Ms Pac-Man instead of mingling with the ladies.  I recognized one of the fellas ("Vernon") as Simon Helberg of The Big Bang Theory fame.
However, while perusing the Internet for a screencap of the scene (didn't find one), I realized that his on-screen cohort ("Panos Patakos") was none other than Jason Winer.  Who, you might ask?  Well, let me explain: 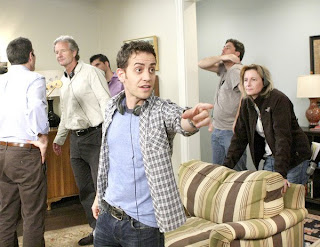 A long time ago, my "big-sister-but-we're-not-actually-related" Leonora Gershman had a small role in a short named The Adventures of Big Handsome Guy and His Little Friend.  It was HILARIOUS - so funny, in fact, that I managed to retain the names of the two lead dudes after all these years: Hayes MacArthur and Jason Winer.  When I discovered Jason's role in Van Wilder, I did a quick imdb search to see what he was up to...and it turns out he's been really busy as the PRODUCER AND DIRECTOR OF MODERN FAMILY. So, basically, that puts me in a six degrees of separation-type situation with Modern Family.  Yeah, I'm jealous of me, too.
Posted by Amanda