KK Gives You Your Opinion of MACGRUBER 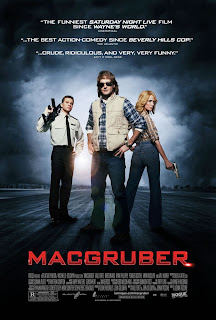 We used this long Memorial Day weekend to take in Macgruber, the Saturday Night Live-inspired comedy featuring Will Forte, Kristen Wiig, Ryan Phillippe and Val Kilmer. Though AK was a little less than inspired, calling it "two awesome actors surrounded by ridiculousness," I thought it met and exceeded any expectations I might have had. 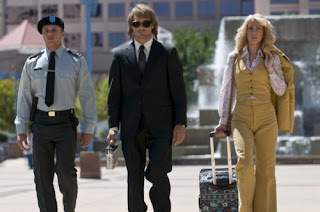 Macgruber with his doorman and a Century-21 agent.

The movie begins by setting up the dastardly deeds the bad guys are planning. In this case, Val Kilmer as Von Cunth, has stolen a powerful nuclear device from the Ruskies and plans on detonating it during the State of the Union address. For a problem this big, the powers that be know they need Macgruber.
Colonel Faith (Powers Boothe) and Lt. Piper (Ryan Phillippe) manage to track Macgruber down in a remote South American village, where he has been living as a hermit since his alleged death 10 years ago. The former Navy Seal/Special Forces/Delta Forces etc. etc. is reluctant to go back into active service, until he learns that he would be facing his arch-nemesis Von Cunth, the man who killed his wife. 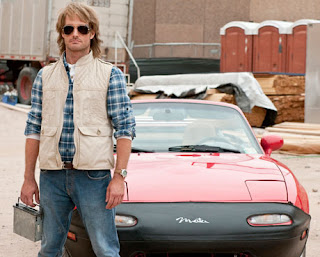 Macgruber heads back to the States, gets his Miata out of storage and goes about rounding up a team of ass-kickers. Only Vicki St. Elmo (Kristen Wiig) refuses his initial advances, and Macgruber is ready to pound some Cunth. An unfortunate homemade explosives accident decimates Macgruber's team, and only the last minute inclusions of Lt. Dixon and a reconsidered Vicki save Macgruber from being taken off the case.
In his typical, bumbling way, Macgruber sets off to take Cunth down. In doing so, we see several of the tried and true action/comedy movie staples. Macgruber, who initially hates Dixon, comes to have a grudging respect for the man, followed by yet another brief falling out. Macgruber and St. Elmo rekindle a love and share what might be the funniest sex scene of all time (seriously, the movie is worth it just for this). The team has some early success but ultimately looks to be foiled, and then is put back in action just in the nick of time.
Ultimately, the guys succeed in pounding some Cunth and wrap up the movie with the perfect homage to the actual Macgruber sketches. Then, just in case you weren't satisfied, the denouement gives us just a few more laughs.
Like many people, I went into this movie with relatively low expectations. It had been several years since I enjoyed a Saturday Night Live movie, and there had been more than a few stinkers in the interim. While the Macgruber sketches are funny, I had doubts that a 90-second sketch would translate into a 90-minute film. The writers, however, did a masterful job of creating an over-the-top comedy. There are sight gags galore, plus enough raunchy humour for two R ratings. Trust me, you will never look at a piece of celery the same again.

What a Cunth gun would look like.
In some ways a send up of 1980's action movies/television and in some ways a slapstick comedy of its own, Macgruber doesn't rely on simply expanding a sketch into a feature length film. Rather, it splices together several ideas that would make good sketches and adds a back-story, some action and the aforementioned sex scene to make a pretty good movie.
I would be remiss if I didn't single out Phillippe and Kilmer for the parts they played. Phillippe is awesome as the straight man to Forte's Macgruber. A by-the-book soldier type, he is eventually dragged down into the muck comedy-wise, and plays that role to a T as well. Kilmer, as the maniacal villain, gets into the role by combining his own strange style with a caricature of several villains I remember from the 1980's movies. The result is a guy that seems pretty menacing, but one that can also deliver lines with excellent comedic timing.
Wiig, playing the same ditzy type of role that is her bread and butter on SNL, also does a great job of providing her own brand of humour. It plays well with the misplaced bravado and buffoonery that Forte brings, and I don't think the movie would have been the same without her.
All told, I would encourage any fan of SNL or comedy in general to see this film. It is R-rated humour at its finest, and I cannot stress enough how much you need to see the sex scene. Fans of Ryan Phillippe and Val Kilmer will enjoy their characters, and I would imagine most people will leave the theatre satisfied with the picture.
I give it 3 out of 4 movie theatre handies.
Posted by kanadienkyle