This is how I imagine the planning session for Avatar went down:

JAMES CAMERON: I want to make a movie with an environmental message and insane special effects.

SOMEBODY ELSE: Great idea. What’s the story?

JAMES CAMERON: Doesn’t matter – we’ll just fill it in as we go.

Before you get all huffy, let me say that I really dug Avatar. It was visually orgasmic, and that’s one of my top five favorite types of orgasms. But, like all James Cameron movies, you just can’t think about it too hard (that’s what she said).

Here’s the storyline, courtesy of IMDB:

When his brother is killed in a robbery, paraplegic Marine Jake Sully decides to take his place in a mission on the distant world of Pandora. There he learns of greedy corporate figurehead Parker Selfridge's intentions of driving off the native humanoid "Na'vi" in order to mine for the precious material scattered throughout their rich woodland. In exchange for the spinal surgery that will fix his legs, Jake gathers intel for the cooperating military unit spearheaded by gung-ho Colonel Quaritch, while simultaneously attempting to infiltrate the Na'vi people with the use of an "avatar" identity. While Jake begins to bond with the native tribe and quickly falls in love with the beautiful alien Neytiri, the restless Colonel moves forward with his ruthless extermination tactics, forcing the soldier to take a stand - and fight back in an epic battle for the fate of Pandora.

(A side note: Notice how many times a military-related word pops up in that description. James has said that his movie isn’t anti-military; that the evil guys running around in fatigues are “Blackwater types” and “corporate contractors.” Now do a Google on “James Cameron is anti-military” and see how many people believe him.)

I have a desire to use a lot of colons and parentheses in this review, so here are the good things about Avatar:
And now for the bad:
Hollywood is ripe with talented writers who are waiting breathlessly on the street corners, pencils quivering, for the opportunity to pen ANY movie, let alone a for-sure blockbuster. And James Cameron’s I’m-the-King-of-the-World-ego drove right past them without even rolling down the window. Instead, he smooshed FernGully and Dances with Wolves together and came up with an unoriginal, yet problematic, script.
The very concept of the Avatar – the entire purpose of the movie – is flawed in of itself. Why would you visit another tribe dressed as a native, especially when they know you aren’t one of them? Wouldn’t you be wary if your dog walked around on two legs wearing your favorite track suit? You certainly don’t see white people visiting African tribes in blackface – how is this different?
For what is supposed to be a serious movie (isn’t it?), the characters are cartoonish. The evil mega-corporation (the movie is sponsored by McDonalds, by the way – just a little, local, family-run business), led by their evil director, who oversees the evil ex-military leader. If someone had handed Giovanni a cat, they could have renamed him Dr. Claw.
The evil corporation is seeking Unobtanium (hilarious), which is found under the sacred tree in the Na’vi realm. The real conflict in the movie – the pivotal character arc – happens after the humans blow up the tree. You can tell that James hasn’t spent too much time in modern-day mining camps, where they magically tunnel underground so that they don’t need to blow up, let’s say, sacred trees. But this movie is 100 years in the future, so maybe future mining techniques will be replaced with high-powered weapons.
And then there’s the environmental message. I mean, THE ENVIRONMENTAL MESSAGE (punches you in the face). James Cameron’s story wants you to know that YOU’RE RUINING THE ENVIRONMENT! YOU! Not him! He’s saving it with his movie! I love environmental blockbusters. I’m sure the entire thing was made with two rolls of recycled toilet paper and an old tire, and each day James glided to the studio on the back of a bald eagle and powered up the computers with farts. I’m all for preserving the environment (and I work in architecture, which has made some of the biggest changes with the biggest environmental impacts – which means I’m better than you), but I’m not going to be told how to do so by a guy with a 25,000 sf house and a private plane. Good writing could have saved this message, made you think about it, made you reconsider tossing your McDonalds bag out of the car window and onto an oil-covered duck. Bad writing – well, it’s Avatar.
In the end, the Na’vi beat the humans and win the 30-minute war. As a part of their victory, they kick the humans off of Pandora. Who, for all their evilness, never ever ever return with even more explosives to give it another chance at getting Unobtanium. They just move on.
Avatar is extremely entertaining. I’d see it again, and I’d recommend that you (in the general “you” sense) see it. But is it “Best Picture”-worthy? Of course not. But with some good writers on board, it sure could have been.
PS – I know I ended a review that makes fun of writing with a grammatically-incorrect sentence. This website ain’t no blockbuster. 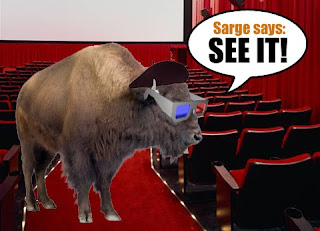