I grew up in Canada and have been curling off and on for about 20 years. I really like the sport and watch as much as I can. The Olympics has featured some great coverage, both on CTV/TSN/Sportsnet in Canada and on NBC/CNBC/MSNBC. With that in mind, I thought I would review what most of my friends watch curling for - the chicks, man!

Keep in mind that this list is solely my opinion, and that opinion has been slightly influenced by others, mostly via Blackberry Messenger. I like the cougars, the ones wet-behind-the-ears and everyone in between. Here is my list (Hurry, hard! jokes in the comments, svp):
1. Eve Muirh 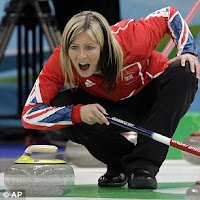 ead (Great Britain)- Now I know my friend Marc is going to be pissed about this selection at #1, but I have my reasons. First, she speaks English. Second, that is some pretty foxy hair and finally she looks a little dirty in a hot way. Not much of a curler, but that's okay by me. She yells well and can hurry hard with the best of them.
2. Anna Sidoro 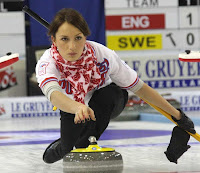 va (Russia)- The Ruskie third is definitely hot, and doesn't look all that "Russian". That said, I would be rushin' anywhere she told me to go, as she looks pretty steely-eyed and is obviously an intense competitor. I hope she becomes a fixture on the world circuit, as I really want to see more of her. Meow.
3. Ludmila P

rivikova (Russia)- The Russian birds go 2-3 here, and in reality, I could take the entire team. Likely the most consistently hot from top to bottom (pun intended). I tried to take the best two, though I am sure there will be some debate on the matter. I, for one, am confident I have made the best choice. Ludmila has a wicked name and looks Russian, which I find fetching. Not much wrong with her game either. 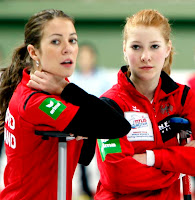 4. Melanie Robillard (Germany)- This lovely is actually Canadian-born, so she is a double win for me. At the moment, I can't think of anything hotter than the German lasses yelling at their sweepers. I realize that might be childish and immature, but I don't care. Its my list. She also has an excellent come-hither pose, as seen here. (On left)
5. Stella Heisse (Germany)- An actual German-born German, Stella is only 17 but is going to be a stunner when she has that magical 18th birthday party. Until then, she gets number 5 on the list and I avoid a visit from Chris Hansen. (On right)
6. Cheryl Bernard (Oh Canada!)-

Lest you think I have no national pride, please let me introduce you to the cougar-ific Ms. Bernard. You don't really notice her the first time you see her, then after a few more looks, you find out you are hooked and sort of wish she was your Grade 12 teacher back in the day. Equal parts disciplinarian and nurturing older woman, I have the feeling she could teach you all about how she likes her in-turns and out-turns.
7. Madeleine 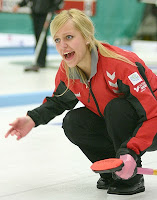 Dupont Denmark)- This Lady Gaga look-alike takes 7th spot on the list in cooperation with her sister Denise. I gave Madeleine the nod simply because of her affinity for topless photography. She is a pretty decent curler, easy on the eyes-ish and obviously likes to party. What more could you ask for in a Lucky #7? 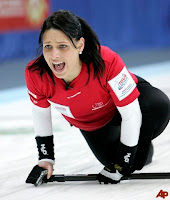 8. Carmen Schaefer (Switzerland)- This Swiss Miss is oft-overlooked in the discussion of hottest curlers because she can blend in a little if need be. Don't let that fool you though, as she is hot in her own right and sports a tongue ring. You know why people need tongue rings right....? Because they want speech impediments and chipped teeth, of course. 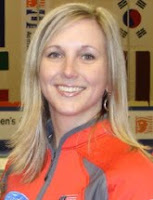 aanstad (USA)- A Madison, WI native, Joraanstad represents the United States admirably in the competitive world of hot curlers. A stand-out on a pretty pedestrian US team, she gives the Yankees something to cheer about as their skip sails another rock through the house.

illa Jensen (Denmark) - This somewhat stern looking curler also has a softer side, and is one of the ladies featured in the curling calendar making the rounds on the internet. She rocks (pun also intended) a nice smile is a worthy contender at #10. I listed her here instead of Irene Schori because Jensen is on the team rather than just an alternate. Schori does excel at showing off her ta-tas, so she is the choice for Honourable Mention.

TMZ also has a pretty sweet list, with slideshow.
Curling calendar pics here.
Finally, I want to commend the NBC curling team of Andrew Catalon and Don Duguid. Both are doing an admirable job in covering the games while patiently explaining the rules and other intricacies to the viewing public. They can't match an old master like Canada's Vic Rauter, but they are on their way and are really doing a service to the sport. Well done fellas!
Posted by kanadienkyle