Speaking of THE HURT LOCKER...

This isn't a gossip blog by any means (if you're looking for good ones, try either Ted or Lainey), but we just saw The Hurt Locker and this little gem popped up on MSN Entertainment (unabashedly copied verbatim):

Charlize and Jeremy Get 'Extremely Comfortable'
Just chums or really chummy? That's what some wishful-thinking romantic types are asking in light of Charlize Theron's recent hang-time with Oscar-nominated "Hurt Locker" star Jeremy Renner. The actress, who reportedly ditched longtime love Stuart Townsend last month, was spotted with her "North Country" co-star at a Los Angeles music club on Feb. 10. "They were very friendly," a spy tells People magazine. "Charlize didn't seem heartbroken. She was enjoying Jeremy's company."  Another source adds that they looked "extremely comfortable together." A few days later, Theron "palled around" with Renner as she hosted a shindig for "The Hurt Locker." Still, an insider downplays their bond, describing them as "just really close friends."

That makes this picture super-awkward (the guy on the right is aforementioned Stuart Townsend): 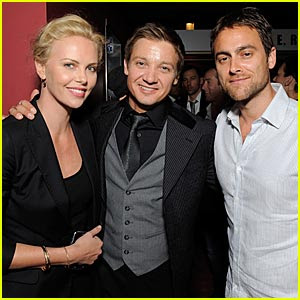