KK Recaps LEGEND OF THE SEEKER: 2x12, THE HUNGER 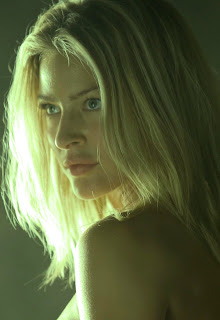 My wife and I have been watching LOTS for about 8 months now, ever since that fateful Saturday afternoon when one of us was sick and we happened to catch an episode. We first assumed the show was about Zedd, and were a little annoyed at all the scenes with Richard and Kahlan.
We have it all figured out now and watch the show every Saturday. So, as a regular feature of this blog, we will endeavour to recap each and every episode from here on out. AK might even take a stab at the Season 1 episodes on DVD. We'll see though. If you don't want to know what happened, stop reading now.
I was excited/nervous for this episode all of last week, ever since I saw the preview showing Cara as a baneling! Spending a week thinking the reigning Miss Kosior Laminette might die and be written off the show was a little too much for this old cat, so I started viewing with a little bit of apprehension. The episode did not disappoint, however, as we are treated to some WIZARDS FIRE! right away (Why doesn't Zedd use this more often? Limited special fx budget or a lazy wizard?). Anyways, a poor, pathetic waif soon stumbles upon the merry band (Richard, Kahlan, Cara and Zedd), who must have been searching for the Stone of Tears for at least 10 minutes, with a miserable tale of woe. Despite the others wanting to keep their eyes on the prize, Richard of course agrees to help her save her husband or boyfriend or whatever. Does it really matter? We know its sword fight time!
Not wanting to disappoint, Richard breaks out the SWORD OF TRUTH and starts slashing the extras while Kahlan flips her hair and uses her Swiss-er, Aydindril Army Knives to inflict serious flesh wounds on the hapless baddies (and confesses a poor soul - Glen Levy, who gets it in just about every episode - only to send him home to a life of the mindless drudgery of honest work). Cara barely breaks a sweat giving her quota of faceless meanies the dildo send off with the Agiel. Even Zedd decides to join in by using what appears to be the Force to knock down some fighters.
Kahlan gets a flesh wound of her own, and Richard sends Cara into the woods to chase down a retreating villain (I guess they have a no prisoners policy) and she is jumped (not in the good way) by the dude, who slashes her throat before she kicks her ass. She bleeds out on a rock and boy howdy, do we have a problem.
Cara goes to the underworld and wakes up naked (MEOW) and starts looking for Rahl to get "the deal." Rahl is unsure as to whether or not he should let her back topside, but Cara gamely convinces him (and seriously, why is he asking stupid questions while she is standing there naked? I would be admiring the creases left by her leather onesie) to let her go back as a baneling and very sweetly explains to the viewers the finer points of Baneling 101.
Cara goes back to the group and Richard breaks out his worried face while Cara and Kahlan square off. They finally get moving again, and go off in search of the waif's husband. A dude that looks a little like a bigger Jack Black has been kidnapping Midlands folk and selling them to banelings to kill. I assume he is a recipient of money from President Obama's new jobs bill, and he is putting it to use with some good old-fashioned capitalism. Its all for naught though, as our heroes kill everyone and let the kidnappees go. The waif finds her man, and they skedaddle without much fanfare.
Meanwhile, the on-set nepotism rears its head as we see Zedd's brother Rad-Thad show up with a cart, sans horse, at the shop of Sebastien the Magic Peddler (or Sam Raimi's brother, Ted). Thad has some old Zorander family heirlooms, and the foreshadowing kicks into gear when its discovered the shadow water (dark magic, natch) will cure banelings. The two break out their Midlands Billy Mays routine, and all is peachy except for the fact that they are watering it down! Where is the Midland Better Business Bureau when you need it. 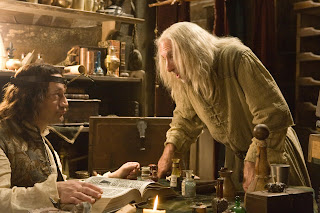 Cara questions one of the banelings in the murder store and finds out just what its like to be undead. This little sob story about being a baneling is really too much, and I suspect it will soon be a hate-crime to harm one in any way. Anyways, baneling life sounds pretty gross, and Cara's skin is starting to fall off. I became slightly disinterested at this point, but was soon back on Team Tabby when she returned from her quenching her need for MEAT/killing big Jack Black. Her skin was restored and the group went back on their walk about to find the magic elixer, which the sad baneling has told them about, thus fulfilling her life as a plot device.
Richard, Kahlan, Cara and Zedd arrive at Sebastien's place, and do a little rough housing. Sebastien agrees to talk, but merely laments that he could help if only it weren't for that damn broken magic map machine (alliteration!). Zedd handles this with aplomb, and as luck would have it, they are only a couple day from the source. Cara displays her trademarked worried face (as distinguished from the lusty face and the eye roll), as she now much kill even more peeps before she gets her meds. I hope banelings are covered in the health care compromise.
They all set out for the source/fountain of youth and still NO ONE IS WORRIED ABOUT CARA. (Call me, Tabby, I will look after you). Along the way, she finds some D'Haran soldiers to kill one night, but is a little miffed to find out she has no one left to jack up on night three. Zedd's bro Thad, along for the walk so he can redeem his shitty life, is starting to look pretty good. But since Cara is good now, she doesn't have the guts... or does she? Alone by the fire, Cara is visited by Darken Rahl, who apparently travels on the Floo Network. He gives her a pep talk and soon Cara is thinking about knifing old Thad.
She asks him to go for wood (and really, wouldn't you?) and he gamely follows her into the woods. She still can't shank him, but does give a teary confession (with a hint of Aussie accent) about being a baneling, to the astonishment of the least perceptive people since the news interviewed a serial killer's neighbour. Thad, depressed after learning she really did just want to get some wood, throws himself on Cara's knife, giving her another 24 hours before she RUNS OUT OF TIME.
Luckily, the Seeker is a master map reader, and has found a shortcut to the source of shadow water. He takes Cara and hauls ass while Zedd and Kahlan drag Thad's body around for a while, just for kicks I suspect. Thad, who is now in the underworld, isn't has hot naked and thus doesn't get a sweet deal from Rahl. He does, however, cave into Rahl after about 8 seconds of torture (the CIA should call this cat!) and giv es up the location of the shadow water.
Rahl, being a bit of a dick, decides to make a sinkhole where the shadow water once sat, and Cara and Richard barely make it before the commercial. When we return from some lovely feminine hygiene ads, Richard is making a gallant attempt to reach the water from his safe perch. He just manages to dip his digits in there, and Cara sucks off enough (I know, I know. I am amazed I can type with one hand) to restore her to good health and vigour.
Cara gives old Thad the breath of life and everyone bro hugs. Problem solved dude. The gang goes on walking on a path/looking for the Stone of Tears (?) and the credits roll.
The end, man.
Next up: COSTUMES and cleavage. Can't wait for Saturday, bra. 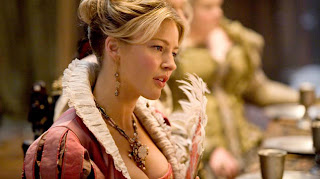