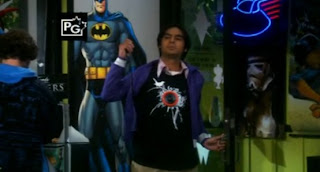 Let me first note that it's nice to be back to regular programming after the Olympics! S3E16 opens with the guys in Sheldon's comic shop. Raj bursts in with a sweet t-shirt that plays music, in this first scene its the Imperial March from Star Wars. (Incidentally, its also my ring-tone. I, too, want to be feared and respected).
Raj takes a little ribbing (for her pleasure) over the shirt until the guys find out that comic-book icon will be appearing at the store. Their nerd hearts are all aflutter, and they retire to Leonard and Sheldon's apartment to choose their to-be-signed comic books.

It is soon discovered that Sheldon has an outstanding summons for a speeding ticket he received while rushing Penny to the hospital. Sheldon is determined to fight the ticket, despite the fact that the summons is coincidentally for the same day as the Stan Lee. As none of our intrepid scientists are willing to go with him to court, he decides Penny is the next best bet. (PS, does anyone else think Kaley Cuoco 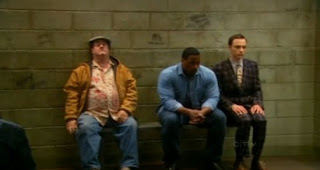 was hotter before she trimmed up and lost s 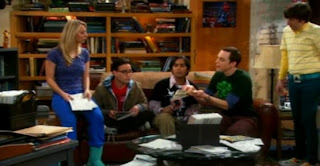 ome of her boobs?)
Sheldon prepares a thorough and well thought out defense to his crime. The judge, unimpressed with the pro-se Sheldon, finds against him. Sheldon, being Sheldon, gives the judge some lip and soon finds himself in contempt of court and jail.
Unwilling to apologize, Sheldon decides to wait it out in the clink, which brings me to a conveniently placed pet peeve of mine. Did you ever notice that anytime someone gets thrown in a holding cell, the other inmates look like a Benetton ad? By that I mean they are almost scientifically arranged so as to not aggrieve any race or demographic. I understand Big Bang is a Monday night sitcom, but I see this same scene everywhere and it grinds my gears. Though I am sure there are still people out there waiting by their TV sets to see something alledgedly offensive, I think it is high time we moved past the need to worry about any insinuations made by a holding cell scene. /off soapbox
When Sheldon finds out that he has to pee in front of his fellow prisoners, he relents and decides he can indeed apologize to the judge. All is well! But wait, Sheldon is carrying a grudge against Penny for his missing Stan Lee. Penny, being the good-natured midwesterner, decides to make it right and tracks down Stan Lee's address with the help of some old-fashioned sexual bribery.
Penny takes Sheldon over to Stan Lee's house, and of course Sheldon is very excited. Things don't go so well, as Stan is a little less than excited to see another fan-boy. Sheldon barges into the house after Lee's sarcastic invitation, and Sheldon becomes the proud new owner of a restraining order from Stan Lee, which apparently matches his Leonard Nimoy restraining order. This brings me to my second pet peeve of the night, which is poorly thought out guest spots. 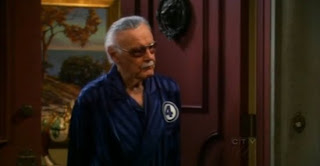 Stan Lee is the perfect for this show. The characters spend a lot of time in the comic book store and/or discussing the comic book pantheon. With that in mind, couldn't the writers have come up with something better for Stan to do? He essentially just came on screen, accepted the applause, grumbled a couple of lines and was gone.
For a show that is typically so well written, this smacks of a little laziness to me. Perhaps Mr. Lee wasn't interested in any more than what he did here, but as we know from Mall Rats, he is capable of delivering his lines well and believably. This appearance was nothing more than staged applause opportunity. For shame writers! Just kidding, we still love the show.
Check back later for our take on Marriage Ref, and Better Off Ted!
Posted by kanadienkyle