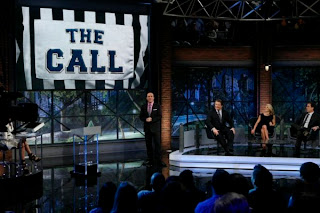 NBC's new reality (?) program, The Marriage Ref, debuted after/during the Closing Ceremonies of the Winter Olympics in Vancouver. While I would have preferred NBC stayed with the Ceremonies, I have the luxury of DVR and wasn't too terribly put out.
The premise of the show is that a celebrity panel decides a quarrel/tiff/brouhaha between a married couple, and offers a little witty banter on the subject matter. The panelists discuss the matter, Natalie Morales (of NBC news) offers some statistics, host Tom Papa (who is completely unnecessary) makes a bad joke then the group votes, and Papa informs the couple who has won the battle.
The premiere episode featured heavyweights Alec Baldwin, Kelly Ripa and Jerry Seinfeld, who were all very likable and funny in the non-offensive way that NBC seems to favour nowadays. The aforementioned, extraneous Papa is certainly bland and kitschy enough to be a host, but was trying WAY too hard to keep up with the seasoned pros on stage, and it came across as a little desperate.
NBC also tried to give a boost to its flagging news programs by having Morales appear as some sort of researcher, offering canned information about the topics being discussed by the married couples. She is lovely to look at, but offers little in the way of substance. 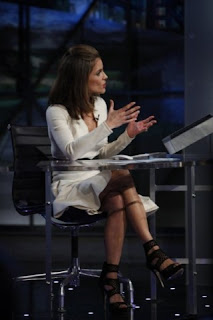 Both couples featured were really likable and had some obvious, but not-too-serious problems to be hashed out. The New York couple disagreed on a stuffed pet and the Georgia couple couldn't come to a consensus about a bedroom stripper pole. The panelists ended up giving both decisions to the wives, which was more or less how things should have played out, though I still think the Georgia wife should have given the pole a chance (pun intended).
Like I say, I think the show will work well for NBC on Thursday night, where it has a strong lead-in lineup and a very healthy cast of guest stars to pull in viewers. A variety/reality hybrid, I think this one will at the very least provide fodder for Joel McHale and The Soup, and might even become a ratings hit for NBC.
I give it 2.5 living room handy's.
Posted by kanadienkyle