This Is Your Opinion on HOW TO MAKE IT IN AMERICA: Episode 2

To ease our post-Olympic hangover, AK and I DVR'd several episodes of How To Make It In America, and are just now getting around to watching them. We really enjoyed the Pilot and are forging ahead with the rest of the episodes we currently have on hand. 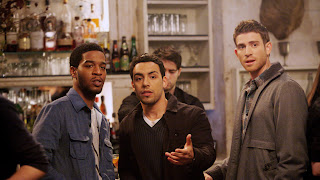 As is often the case, the episodes subsequent to the pilot are often of increasing quality. HTMIIA is no different. Episode 2, Crisp, picks up where we left off. Cam and Ben have their ill-gotten denim and are now looking for a manufacturer for their 1970's-inspired line of jeans. Our two hustlers try out a couple of avenues to find a manufacturer, but are rebuffed at each turn. They happen upon one of these impossibly cool parties thrown by their impossibly cool friends, where they meet designer John Varvatos, who offers them a meeting. It doesn't quite work out they way they want, but the guys are determined to make it work all the same.
That's your basic plot for this episode. Rene shows up briefly to collect his vig from Cam and Ben, and we see far too little of Lake Bell as Rachel. All the same, this was a wonderful follow up to the pilot episode. Victor Rasuk, as Cam, gets better by the minute and Bryan Greenberg as Ben has shed some of the mopey-ness from the pilot and is now a little more believable as a good-looking street hustler.
The realism that the show is striving for has improved, as evidenced by the scene where Cam and Ben are looking for an address in the Bronx. Instead of just walking and delivering dialogue, the guys are actively looking up at building numbers. Just a small touch, but one that goes a long way. We also both liked the quick cuts between scenes that were interspersed with still-life photos of New York, and right before the J. Crew party, pictures of J. Crew ads. It really gave the episode the feel of a small-screen version of Snatch, without the accents or Gypsies. Nice touch HBO! 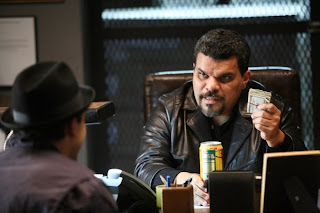 The other aspect we liked about the episode was the evolving dynamic between the two main characters. To us, it seems like Cam does most (all?) of the work and is the person truly committed to the idea of creating the line of jeans. He will hustle, lie and even give cheesy toasts to get ahead, while Ben seems intent on being the big picture guy. That said, Ben seems to have regained his spine and will not let setbacks (or in this case real world advice) get in his way. In a bit of a surprise turn, he stood up (in his own pouty way) to his ex-girlfriend despite his obvious lingering affection for her.
Finally, we are both fans of how the episodes end with a just slight ray of hope (the real kind, not what the President is selling) for our two anti-heroes. If the writers can make us believe that two twenty somethings with nothing but nice hair, a roll of denim and staggering debt can make it, then we can too!
Posted by kanadienkyle

Email ThisBlogThis!Share to TwitterShare to FacebookShare to Pinterest
Labels: Bryan Greenberg, How to Make It in America, Lake Bell, Luis Guzman, Victor Rasuk