AK and I sort of stumbled upon this show in the middle of winter when there was nothing else on and we just couldn't be bothered to talk to each other. I recalled seeing some good press on the program, and since Patricia Heaton has some big boobs, we (I) decided to give it a try. 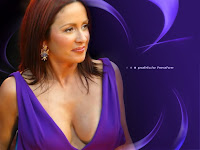 Wednesday's episode had a double-edge feature to it, as it was both Sue's (Eden Scher) birthday and Brick's (Atticus Shaffer) big chance to win a spelling bee. Brick is the obvious scene stealer amongst the kids, and this episode was no different. He is just plain cute (and I know boys hate to hear that, I did, but I can't think of how else to describe him) and delivers his "smart-kid stereotype" lines without coming across as a brat. That said, Sue is rapidly carving out a nice niche for herself as the overly dramatic teenage girl. 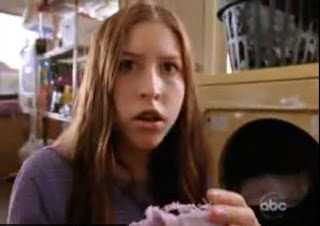 So while the parents with busy with menial tasks and/or cheering on Brick's spelling successes, Sue was dropping big hints about her upcoming birthday. Naturally, they forgot her birthday and tried to smooth it over by making Brick's spelling bee in Chicago Sue's "birthday trip," a trip where she would get to call all the shots.
Inevitably, the trip becomes sort of a disaster. Sue wants to see some tourist-y places (including a large tree stump), insists the family stops at a greasy diner and chooses what may be one of the worst motels in Chicago. That said, Dad Mike Heck tries to make her birthday a little better by offering some donut holes (Brick's favourite) and promising a party.
A placated Sue and the rest of the family cheer Brick on as he nearly wins the regional spelling bee, losing a tough one by bringing back his whispering fetish (Brick's character will often repeat whisper the last word he said in a sentence, though this gag seems to fade in and out by episode).
Brick isn't disappointed, and the family heads back to Indiana, all seemingly happy to have had the family experience. Sort of a neat wrap up, but it's part of the charm of the show. The kids (including Charlie McDermott as Axl) are very realistic (Sue is our favourite because of her note-perfect portrayal of a 14-year old girl) and the parents, Heaton and Neil Flynn (Janitor from Scrubs) are seasoned sitcom veterans who clearly know what they are doing. There are very few gross-out type lines, the kids are nice to each other without the show being 7th Heaven and its easily relatable to anyone with a sibling or parents. If you haven't already, check it out.
Posted by kanadienkyle