This Is Your Opinion on SHE'S OUT OF MY LEAGUE 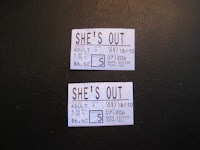 After a run of some pretty forgetful movies, AK and I were excited to see She's Out of My League. Our friend/guest reviewer Marc saw it a couple of nights ago and liked it, and so we checked it out last night and walked out of the theatre satisfied. Here is your opinion of the film (SPOILER ALERTS!):
The basic premise of the movie is that Kirk, played by Jay Baruchel (Canadian!), is a sweet but uninspired TSA agent who doesn't have much going for him besides some really good friends. His family is a mess, his ex-girlfriend Marni (Lindsay Sloane) is a wench and inexplicably still hangs out with his family, he drives a Neon and didn't get to go to college.
His friends, highlighted by T.J. Miller as Stainer, are pretty rad dudes and provide not only comedic opportunities, but also some good advice from time to time. In addition to Stainer there is Jack (Mike Vogel) and Devon (Nate Torrence) who really don't serve much of a purpose, but do the trick admirably all the same. Note to Mike Vogel: My wife hearts you. Seriously.
Kirk still carries a torch for Marni, but she is dating Ron (Hayes MacArthur. Is there a more presidential sounding name?), and wants nothing to do with him anymore, other than sharing his family. As luck would have it, the very beautiful (Kyle says, Meh: 8-) Molly (Alice Eve) passes through Kirk's station at TSA, forgets her iPhone and the plot is put into motion. 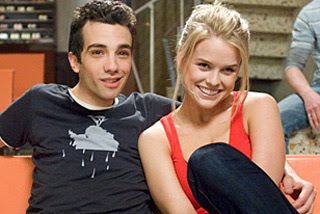 Kirk offers to return the phone to Molly, who is so grateful she asks Kirk to a hockey game. While at the Pens' game (from two years ago, I saw Georges Laraque out there), Molly's friend Patty (Krysten Ritter, meow) tells Kirk that Molly has a thing for him. Kirk can't really believe it, but nevertheless they start to date and no one can believe it.
As is the case with nearly every romantic comedy, there is montage of dates followed by a series of pratfalls, misunderstandings and the inevitable mini-breakup, then a revelation by one or both parties, usually assisted by a friend, that leads to a tearful make-up/kissy-kissy time at an airport or train station.
In this case, we have a litany of problems. Kirk is a little intimidated by Molly's ex-boyfriend Cam (who also is still in good with her family), Kirk's friends tell him he isn't good enough for Molly, Kirk's family is sort of strange, Marni wants Kirk back, Kirk prematurely ejaculates in his pants and thus can't stand up to shake the hand of Molly's old-school father, Kirk's lack of self-esteem gets the better of him and he lashes out at Molly, Cam (Geoff Stults) wants Molly back and after the mini-breakup, Kirk takes Marni back. Whew! 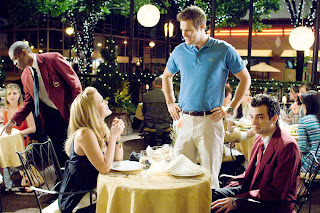 I would just like to take a quick time-out to illustrate that there are not one, but two families in this movie that take a shine to either ex-boyfriends or the new boyfriends of their son's ex. Is this a little weird or am I old-fashioned? Perhaps I should jump on the bandwagon too, since some my wife's family still likes one of her exes. So I say to you, Brian Macaulay, if you are out there and can drag yourself away from the white lady for a little while, join us in the Twin Cities when Erica comes home, or this summer on Martha's Vineyard. I promise to make it super awkward! /end time-out
In the nick of time, Stainer realizes that he undersold himself, which led to his own "perfect" girl breaking up with him, and is able to apply this knowledge to Kirk's situation. He enlists Patty's help and together with the other friends, help to stop Kirk's plane to Branson and get him together with Molly. The end. Oh, and Kirk starts taking flying lessons. HAPPY ENDING!

So, that's the movie in a nutshell. As you may have guessed, we were both pretty pleased with the movie. It was funny, had some awkward moments and also had a message, and you can't go wrong with a message. In addition to Baruchel, I really liked T.J. Miller, who is a dead ringer for Canadian Olympian/disappointment Joe Thornton, currently with the San Jose Sharks. He was very funny as the best friend/wing-man and really nailed it with the Hall and Oats tribute band scene. I hope to see more of this dude in the future. 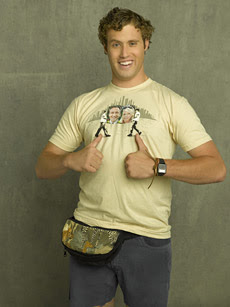 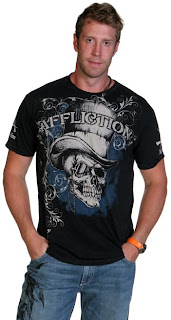 Krysten Ritter was scorching hot and filled in her best friend role quite well. She delivered her lines with a little too much gusto at times, but lets be honest, I wasn't looking at her for her acting skills. While on the subject of Ms. Ritter, the movie posted outside of our theatre featured a picture of Krysten along with the other cast members, all of whom were numbered accordingly to their looks, which is a theme in the film. She was labeled a 7, which I deem a travesty. Though she doesn't have the gigantic cans of Alice Eve, she is 9- for sure, and I wish to challenge the graphic designer of said poster to a fight. Not to the death or anything, but just til we are tired or I find something better to do. 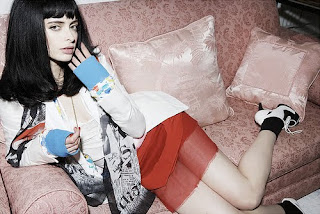 We both found the cast of characters very likable, and each person played their respective roles well without trying to do too much. Kyle Bornheimer (who looked like a young George Costanza) as Dylan and Jessica St. Clair as Debbie (Kirk's brother and sister-in-law) were especially good, and Hayes MacArthur had a couple of really excellent scenes as Marni's new boyfriend.
Other than the slightly formulaic feel, I can't think of any real complaints about this film. It is exactly as it purports to be, a fun romantic comedy without any deep meaning or sub-texts. I am slightly offended as a Canadian that Jay Baruchel can't hold a hockey stick properly (as first noted by Marc), but other than that I was very pleased with the movie and thus award it 4 out 5 Movie-Theatre Handies. 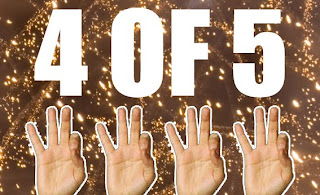