This Is Your Opinion on MODERN FAMILY (Season 1, Episode 18)

Wednesday night is fast becoming ABC's version of must-see tv, anchored by three surprisingly strong sitcoms. AK and I watch The Middle, Modern Family and Cougar Town on a regular basis and we typically find Modern Family to be the class of the bunch. 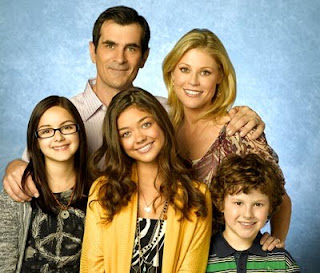 Last night's episode once again managed to squeeze in all the cast members, which has to be a tall order for the writers. The Dunphy's were busy around the house keeping the kids working on school projects. Manny, Jay and Mitchell were out star-gazing while Cam and Gloria spent some time out on the town.
Though all the cast members are strong and play their roles, be it comedic or straight-man, very well, we usually find Phil and Luke get the most laughs from us. The suggestion that both characters might suffer from ADHD and the subsequent scenes offering proof were priceless. From Luke trying on noise canceling headphones and thinking that no one could hear him speak to Phil getting sidetracked looking for a screwdriver, the writers artfully blended slapstick with thought provoking humour.
The dialogue was great, too. To wit:

Claire [after eating Haley's cupcakes]: Do we still have the number for poison control?
Phil: I love you, Claire, I'll always love you!
Luke: My mouth is asleep like at the dentist.


Luke (Nolan Gould) was the real star of this episode, delivering a couple of awesome lines like the one quoted above and in the prior scene when he is practicing his school speech in front of his sister and warns that aliens are on their way to liquefy us and use us as fuel. "Wake up people, we're next!"
As a final word and question to the hockey fans out there, is it me or did the dress that Mitchell was wearing look a lot like a San Jose Sharks home uniform? You be the judge. 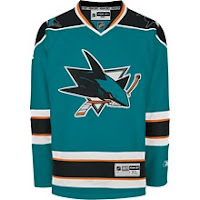 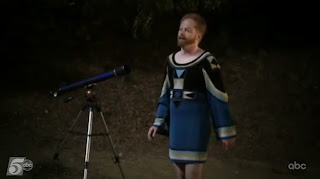