This is Your Opinion on How To Make It in America 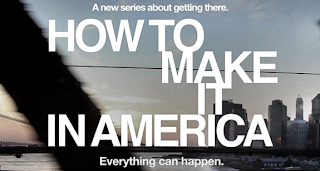 AK and I finally sat down last night and watched the pilot of How to Make It in America, the new-ish HBO comedy? that we had DVR'd ages ago. As you may have guessed, we weren't particularly excited about it and had passed it over several times for the Olympics, old episodes of Tosh.0 and even a re-run of Cougar Town.
To save you the needless strain of scrolling to the end, we liked it. Shot with the same feel and realistic New Yorky-ness of Bored to Death, How to Make It In America stars Bryan Greenberg as Ben Epstein (that's right, a guy with a stereotypically Jewish name playing a guy with a stereotypically Jewish name) and Victor Rasuk as Cam Calderon, both 20-something slacker types with no apparent ambition other than to strike it rich and hating "the man".

The pilot basically serves to introduce us to the main characters and to set up the direction of the series. Ben is still upset over a recent breakup with Rachel (the lovely Lake Bell, who isthisclose to going on THE LIST) and has embraced his ennui by working at Barney's. Cam is still looking for the next get-rich-quick scheme and has to pay a debt to his gangster cousin Rene (Luis Guzman, who can look sinister and hilarious all at the same time). The pair have some pretty cool friends (who want to set them up with hot and easy chicks) with unbelievably big apartments and all the right connections plus some douchey acquaintances (Eddie Kaye Thomas) who remind them of how far they have to go before they become "the man". 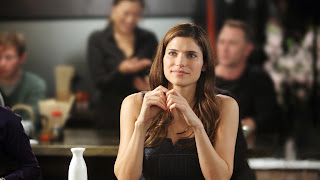 Why two guys who hate "the man" want to become "the man" is beyond me, but show has a lot of promise and is generally well-acted. Bryan Greenberg has that generic leading man quality about him and plays a disaffected hipster very well, moping through several scenes in a row without becoming unlikeable. Victor Rasuk appears not to be acting at all, and I would have no trouble believing that there is no line between his character and himself. Guzman is his usual self, a reliable actor who is completely believable in whatever he does. Shannyn Sossamon (as Gingy Wu) is the perfect connection for our two anti-heroes and the rest of the casting is very good, including the immediately dislikable (I know this isn't a word) Darren (Jason Pendergraft), who plays Rachel's new boyfriend.
So, along with several pluses must come a couple minuses. First, for a show that I think is aiming to portray a real-looking New York, they did a poor job with the Barney's angle. Ben wasn't nearly dressed-up enough to work there, and second, he is portrayed actually speaking to AND helping a customer. In my experience, this is entirely fictional, just like the Loch Ness Monster and female orgasm.
The friends and apartments are a little much too. Does every character have a huge loft with 12 foot ceilings and nice rugs (this is AK's point because she handles decorating. If it were up to me, it would be all white walls and neon beer signs)? This is a pretty common complaint about sitcoms, but it would be nice to see actual depictions of what some of these jokers could actually afford.
Finally, Eddie Kaye Thomas plays a hedge-fund manager who likes hookers. Is this realistic today? I thought the government frowned on those shenanigans after the bailouts?
All the same, we are going to continue watching the show. And you should too.
Rating:
Three (3) living-room handies.
NOTE: There is a graphic coming for this soon. We just need to decide what accurately depicts a hand job.
Posted by kanadienkyle