This Is Marc's Opinion on She's Out of My League 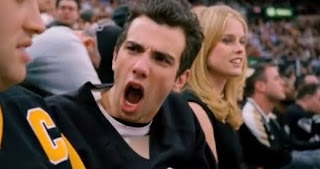 AK and I are going to see She's Out of My League tonight. Our friend Marc and his girlfriend Kari saw it last night. Here is Marc's review:

At the urging of my girlfriend, I went and watched the movie She’s Out of My League this week and was pretty pretty pretty impressed. From the previews that I had seen I wasn’t sure whether it had all been laid out on the table or not – and to my surprise, it had not been. With a raucous mix of in-your-face humor as well as some well played physical humor it was enjoyable from start to finish. The best term that I could use to describe the movie was AWKWARD!
There were a couple of points in the movie that I caught myself pulling my shirt over my face in a failed attempt to shield both my eyes and my dignity (whatever is left) from a car wreck in the making. Jay Baruchel’s first real staring role was memorable and has a Michael Cera feel to it. I could possibly be biased as the first time I saw Jay was on the Michael Cera webisodes Clark and Michael. Regardless, he played his role very well and was truly enjoyable. My 1 piece of advice: Someone needed to teach him how to hold a hockey stick. No pun intended. Alice Eve, the heartthrob of the movie, didn’t disappoint. She was there for sex appeal and was all 28 years of it.
The only negative issue I had with Alice was that her American accent was forced and I found it to not be real whatsoever. But you be the judge. T.J. Miller – a newcomer to the movie world played his role well. With the name Stainer – the reason to be revealed in the movie – there was bound to be laughter. I had a hard time accepting him as him for the main reason that I had Seth Rogan in my head whenever he was on screen. This could just be me though. Overall I thought the movie was a great time and I will be purchasing it when it comes out on Blu-ray.
Posted by kanadienkyle

Email ThisBlogThis!Share to TwitterShare to FacebookShare to Pinterest
Labels: Jay Baruchel, Marc Hoe, Movie Reviews, She's Out of My League