She won an award!  Click here to refresh your memory as her role in Criminal Minds.

To unabashedly copy from Boston.com:


QUITE AN HONOR FOR GRANT

The Chlotrudis Society for Independent Film honored character actress Beth Grant with the “Career-so-far’’ award at its annual ceremony yesterday at the Brattle Theatre. Grant’s face should look familiar. She’s had small roles in a number of high-profile films and television series including “No Country for Old Men,’’ “Rain Man,’’ “Little Miss Sunshine,’’ “Donnie Darko,’’ and “Crazy Heart.’’ (We’re partial to her performance as Dwight’s baby sitter on “The Office.’’) Grant flew in from Los Angeles for the festivities. According to the Internet Movie Database, the award recipient will soon be seen in a film about assassins starring Emilie de Ravin, Ellen Barkin, and Zach Galifianakis of “The Hangover.’’
Here is the picture from the article (taken by Josh Reynolds for the Boston Globe): 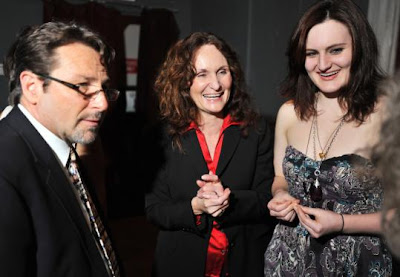 Hooray!
(She really looks so unpsychotic normal in real life)
Posted by Amanda

Email ThisBlogThis!Share to TwitterShare to FacebookShare to Pinterest
Labels: Beth Grant, Criminal Minds, Guest Actors We Like, The Office