As much as I love the quest-y episodes on LOTS, I really dig those that deviate from the storyline.  "Princess," like "Mirror," is one of those comedic vignettes.
The story opens with the Sisters of the Dark knocking off one of their own in order to bring back Nicci, their almighty-leader-and-valley-girl supreme (seriously, Nicci was the best name Terry Goodkind could think of?).

There's always a Mord-Sith on hand when you need one.

Of course, Nicci has one desire - to kill the Mother Confessor so that The Keeper may take over the world.  So she hatches a deal (which you don't see) in which a super-chauvinistic overlord named the Margrave will procure Kahlan in exchange for eternal life for himself and his court when The Keeper reduces the world to flaming pits of green lava.

El Margravo
And so, the Margrave sends his gars to pick up Kahlan: 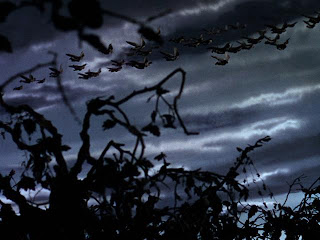 Nice Wizard of Oz shout-out, LOTS!  (Bottom image from Oz)
Richard can't continue on his quest without Kahlan, so the trio decides to break into the Margrave's castle and get her back.  The only problem?  The castle is protected from magic - so they can't just storm in and get her.  Instead, Zedd suggests they swap places with a princess and her family who are off to see the Margrave in the hopes of the princess marrying him and earning them all eternal life.  Done and done.

After
However, a little hair dye and some silk taffeta aren't enough to cover up Cara's manners, which have to be reformatted to fit the Margrave's testosterone-induced ruling system.  The main items: she can't look any men in the eye, she has to behave lovely and charming, and she has to rhyme in poetic meter whenever she speaks.  Cara is less than thrilled.

Cara's facial expressions are the true stars of this episode.
Cara also isn't pumped to find out that she has a little unfriendly competition in the form of another chick trying to win the Margrave's affections.  Fortunately, Cara is better at besting hot chicks than she is at rhyming.

Sure, "down" like this, too.
Meanwhile, Kahlan is locked in the dungeon while she awaits pickup by the Sisters of the Dark.  Joining her underground is the Margrave's current wife, who is to be beheaded to make way for his newer, better wife.  Kahlan turns her plate into a weapon (sweet) while trying to convince the wife that she's better than any dude. 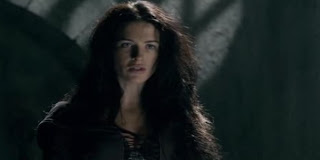 Apparently it's pretty humid in this dungeon.

Kahlan Amnell: Plate-Bender
Cara's not doing too well at this princess business (although she has a little flash of Cara-ness when she tells the Margrave how she tortured her servant - hilarious), so Richard decides to shift to Plan B: Promise the Steward a little Zedd time in return for a tour of the dungeon.  Unfortunately for the Steward, only the Margrave has a key.
Which means...Time for Plan C: Seduce the Margrave's sister and get HER to get the key.  This works out to be a pretty sweet deal for Richard, as she is a stone-cold fox.

"Yep, you."
They go off to get down to business, and Cara and Zedd manage to explain away Cara's questionable behavior and talk the Margrave into a hunt.  The Margrave is all for it because he digs Cara her boobs.

Richard and the Margrave's sister get down to bizznatch, with Richard attempting to get the key by offering to tie her up.  Unfortunately, they are stopped by the Margrave, who catches them and threatens to kill Richard for molesting his sistah.  She complains that she doesn't get a "plaything" like him, so the Margrave agrees to let him off the hook as long as Richard marries his sister.  No longer a virgin anyways thanks to last week's episode, Richard agrees.
Before they leave for the hunt, Cara tells Zedd and Richard that's she through with this goody-two-shoes stuff, and is going to get the Margrave her own way.  So, on the hunt, Cara does what she does best and takes down the animal.  She then cuts out its liver offers him a piece telling the Margrave that it's an aphrodisiac.  The Margrave is appalled, and warns her that she has broken several laws.  She tells him, "Would you rather have an eternity of right and good or an eternity of me?"

Kyle, and The Margrave, pick her.
At dinner, the Sisters of the Dark show up to pick up Kahlan.  Cara manages to distract the Margrave from his dark duties with an offer of nookie, leaving them with Richard and Zedd and the other dinner guests.  And, of course, Nicci recognizes them (WHAT?  How could she see through that brilliant blonde dye job???).  FIGHTING ENSUES.

Judo chop!
Cara gets the key, and they all rendezvous down in the dungeon where Kahlan and the wife are fighting the guards.  Guess who ends up victorious?  If you picked the Sisters of the Dark/the Margrave, you're wrong.  Nicci decides to chicken out by JUMPING OUT THE WINDOW.

What a drama queen.
Don't worry, though - she doesn't die.  She just disappears into a poof of light, ready to return for a future episode.
So, they all escape, and the Margrave is without his Keeper deal and wife and Cara, and the can finally go back to their quest, but this time a little bit wiser(?) and with some sweeter duds. 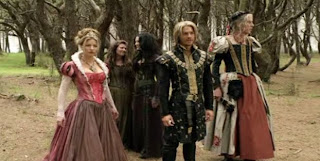 The end.
Posted by Amanda