This Is Your Opinion of THE PACIFIC: Episode 2

Although AK was less than excited about the second episode of The Pacific, I was at least moderately interested. I figured that after a ho-hum start, the series would delve a little deeper into the characters and be forced to improve. 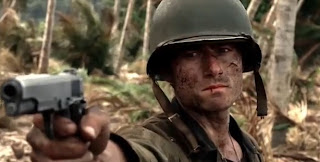 You WILL watch The Pacific!

I guess I was partially correct, in that I can now recognize a couple of the characters and have a better grasp of how each of the two groups of Marines faring during the battle of attrition on Guadalcanal. JP, Hoosier (Cooper from Euro Trip. Truly a forgotten gem), Basilone and Rodriguez (til he died) can be identified with about 80% accuracy by yours truly, and having a connection with the players is helping me to enjoy the show.
As I mentioned last week, the opening credits are still way too bloody long, it feels like the show is half over by the time the close ups of the charcoal pencil are through, and I think HBO should mercy kill it. I wish they would just do a quick opener, go right to the interviews with the veterans (which are excellent) and then move on. With that out of the way, onto the actual show!
I think my favourite part of The Pacific, to date, is the depiction of the night battles fought at close quarters. The confusion of it all really draws me in and serves to illustrate just how frightening it was for these Marines. They can't see, they are out-manned, under-gunned and more than likely suffering from dysentery. Ugly stuff, truly.
This second episode also toned down the douchi-ness of the writer, PFC Leckie. Now he is just a battle-hardened soldier who writes when he isn't killing Japanese. Much better dude. With this mini-series shifting back and forth between the two companies, it likely won't be as easy to identify with the soldiers as it was in Band of Brothers. So perhaps the overtly-defined roles I mentioned in last week's review are needed to quickly define the characters. I am certainly willing to see it through to the end, so I will reserve final judgment for now. 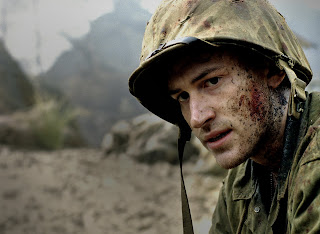 Listen dude, you aren't going to impress my wife with the open-mouth look.

On the negative side of the ledger, AK is of the opinion that there is still too much slack-jawed standing around and isn't a fan of the dialogue. Me, being a 12-year old at heart, I couldn't really care less about what they say, I just like the guns. She would also like a better explanation of what is happening off-island in regards to the naval battles that were affecting the ground war. I wouldn't mind a mention too, since I have done very little reading on the Pacific Theatre, and often have to dig out the books during the show to get an update. Still, not a big deal. Bringing in the Navy would have been an onerous undertaking. 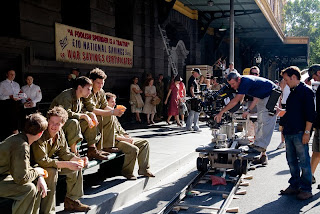 Luckily the producers of The Pacific happened to find locations with built-in cameras.

All told, we were both much happier with this episode and are now really looking forward to Episode 3! Though it would be nice if the entire episode wasn't about them drinking in Australia. Bring it HBO!
Posted by kanadienkyle