Kyle and I live in Grand Forks, ND, which is probably best known for the Flood and Fire of 1997.  You can read all about it here and here and see pictures of it here.

It's springtime, which means...

Technically, it floods in Grand Forks every year. The Red River flows through our downtown (fun-filled fact: it flows North), and when the winter snow melts, the water rises out of its banks.  However, sometimes it really floods, and that's when it makes the news.  You may have read about it last year when Fargo, ND flooded.
It's looking like it's going to "real-flood" again this year in the Red River Valley, and so I thought I'd put up some photos so you can see the progress in Grand Forks.  However, these photos may not be as interesting as some of the other towns in North Dakota, because...
To combat future flooding, the City of Grand Forks installed a flood wall, built up earthen dikes, and created "natural" irrigation to keep the water at bay.  That means that we have a pretty good flood protection system in place.  Last year, we were so well-off that we helped out the City of Fargo and some of our surrounding towns.  Good work, Flood Wall.
So, here are today's pictures taken from my office in Grand Forks, facing onto East Grand Forks.  They won't look like much of anything because not much is doing here (the river is in a flood stage, but it's not visibly that far out of its banks right now), but they will be a good benchmark for the coming weeks.  And we may have a little bit of water soon - Crookston and Fargo are both preparing for a flood fight (you can read about Crookston here).  Click on the photos to see them enlarged. 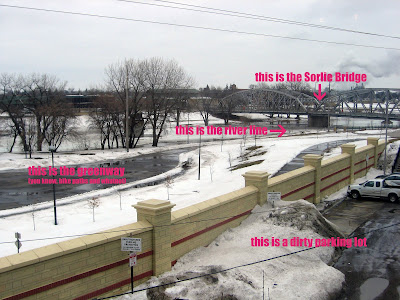 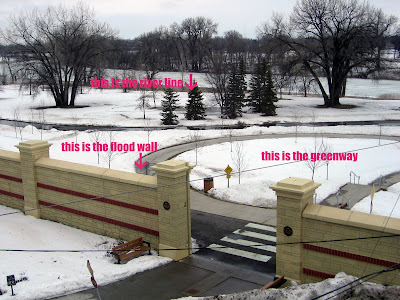 PS - Grand Forks is much prettier than this.  I'm just a sucky photographer.  Plus, it's the slushy and gray part of spring.
Posted by Amanda