One of Gary Larson’s Far Side Comics goes something like this:
A bunch of television writers are sitting around a table. The caption: “The weekly brainstorming session for Bewitched.” One of the writers says, “…And then Endora places a spell on Darrin, and no one knows what’s going on until Samantha figures it out!” At the end of the table, one of his compatriots agrees with a tiny thought bubble that reads, “I like it.”
I imagine The Big Bang Theory has a similar process. I can just picture the writers going down the following checklist as they make up the script:
Not that I’m begrudging it – Bewitched ran from 1964 to 1972, so obviously the formula works. But it does make it pretty predictable. Fortunately, TBBT’s writing is smart and funny which helps carry it along.
Let’s see if we can turn this episode’s predictability into a drinking game:
Leonard, Sheldon, Raj and Howard return home with a large box.

(Drink on “Someone makes fun of Raj for being Indian” – the line is, “Koothrappali is the loveable foreigner who tries to understand our ways and fails.”

Instead of picking up Chinese food as planned, they followed a person that they think is Adam West to a garage sale.

(Drink on “Someone makes fun of Penny for not knowing about nerdy popular culture”– here, it’s “Who’s Adam West? Leonard, what do the two of you talk about after coitus?”)
(Also drink for “Someone makes fun of Leonard for not being Penny’s typical boyfriend”– this time it’s “Hey! Four minutes! New record!”)

At the sale, they bought a box of dorky miscellany for $60.

(Drink on “Penny makes fun of having a nerdy boyfriend/friends”– in this case, it’s “Oh, no. You didn’t trade the food for magic beans, did you?”) 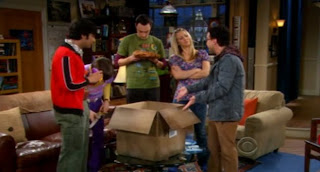 In between the Ghostbusters 2 script and the Alf doll, Sheldon finds a box containing what they think is one of the nine production rings from the Lord of the Rings trilogy. They are all obviously excited.

(Drink on “The boys make fun of themselves for being nerdy” – this time it’s the easy-to-spot, “Holy crap, are we nerdy.”)

The next day, Howard tells the others that he checked with one of his “seedy” friends, Eddie Crispo, who values the ring at $12,000. Now they need to decide what to do with it. Raj wants to split the money and use his cut to buy a jet ski, Sheldon wants to keep it, and Leonard wants to return it to Peter Jackson. Howard seems to agree with Leonard, provided he gets to be a hobbit in Jackson’s new movie. 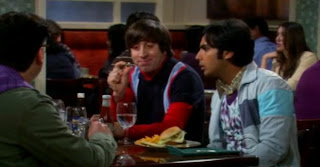 They can’t agree on the ring’s fate, so they give it to Penny for safekeeping until they can come to a decision. Sheldon doesn’t like this plan, and tries to steal the ring from Penny while she sleeps. He wakes her, and she accidentally punches him. 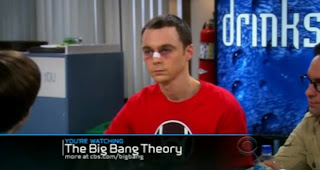 Raj tries to entice the boys to sell the ring by bringing in his cousin, a lawyer.

(Drink on “Someone makes fun of Howard for being Jewish” – here he makes fun of himself with, “If we’re bringing in cousins who are lawyers, prepare for shock and awe.”)

This act has the opposite effect – instead of helping the fellas come to a consensus, it makes them fearful of one another. They all try and take the ring, which has been returned by Penny. Now, they are all stuck holding the ring. They decide the last person to let go gets to decide its fate. 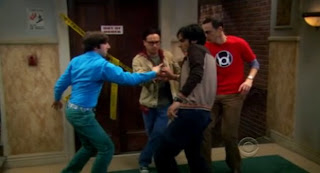 Leonard drops out of the competition early when Penny returns home with something from Victoria’s Secret. The other three attempt psychological warfare on one another, to no avail. They fall asleep, and drop the ring.
When they wake up, Leonard tells them he has shipped the ring back to Peter Jackson because it was tearing them apart. However, secretly, he has stashed it away in his room. Sheldon figures this out, and tries to take it back that night.

(Drink on another “Penny makes fun of having a nerdy boyfriend” – she says, “I gotta go back to dating dumb guys from the gym.”) 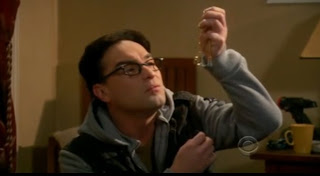