This is Your Opinion About THE OFFICE, Season 6 (So Far)

We had a homeless woman move into the basement of our office last week. We found her surrounded by our filing boxes (that she had arranged by color) and wearing one of our orange construction vests. The police came and got her…and then she returned the next day. When we asked why she came back, she said very matter-of-factly, “Well, I work here.” Turns out, she did a better job at filing than some of our interns. We’re considering hiring her. Now that’s comedy. 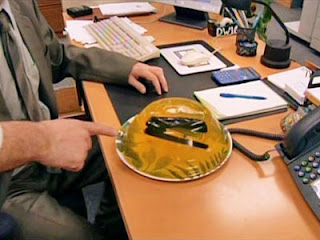 Remember when The Office was actually about life at an office? The first few seasons had Swingline Stapler/Office Space-esque jokes (you know, “You took my stapler.”) that could easily be translated into the foibles of our everyday lives. Or even emulated – I can’t count the number of times I’ve seen office products in Jello since those first fateful episodes. Regular life can be very funny. Just look at Seinfeld.
But now the show is superduper popular, all of the writers/stars/craft services staff are bazillionaires, no one has worked in an actual office in at least 5 years, and so they have forgotten about regular life. Or, more specifically, regular people.
As with most shows, we (the viewing audience) are connected with the characters. We could relate with their frustration in dealing with Michael, Jim’s secret affections for Pam and his distaste for Dwight, etc, etc, etc. Even Ryan was relatable as the grad student temp who just wanted to get his crappy work done and keep his head down.
But look at them now. Jim was manager (they thankfully fixed that), Pam’s a salesman, Stanley’s an adulterer, Dwight’s a ladies’ man, and Angela is a tart. I’m not even sure what Ryan is anymore. You know something is up when the most normal guy in the office is Andy. They aren’t “real” people. They are caricatures of already-fake characters, and everything is too over-the-top. The episodes, in concept, are fine. Michael thinks a salesman is in the mafia, Dunder Mifflin is bought by a printer company – good, good. But the way these characters deal with the storylines…not good.
Which is why the two best episodes of the season (the wedding-aka “Niagara” and “The Delivery”) had nothing to do with office life at all but were still successful because they portrayed actual, believable people in a funny, sweet way. Wedding issues are normal. New parent nerves are normal. I just got an email from my pregnant co-worker that read, “I can’t get over how she breast fed the wrong baby! ‘Wrong baby, wrong baby!!!’ It still makes me laugh out loud.”
So all is not (hopefully) lost. Maybe Dwight will go back to worrying about work instead of drawing up contracts for future children. Maybe the Andy/secretary storyline will gain the same momentum as Jim and Pam. Maybe Ryan will go to rehab and come back normal. Maybe. Thank goodness we still have 30 Rock and Parks & Rec.
PS – Speaking of this new baby, though, wasn’t this whole storyline too reminiscent of Friends? They needed to keep people interested with Ross and Rachel, so they knocked her up, and then we never saw the baby ever again.
Posted by Amanda

Email ThisBlogThis!Share to TwitterShare to FacebookShare to Pinterest
Labels: Mrs. Amanda, The Office, This Is Your Opinion