This Is Your Opinion on THE PACIFIC: Episode 1 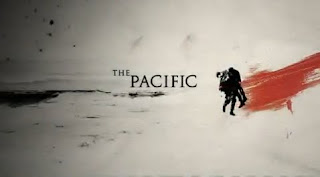 Like the rest of the Band of Brothers-watching world, I was beside myself with excitement over the impending HBO mini-series, The Pacific. As has been the case these last few days, I completely missed the premiere due an all-encompassing attachment to Call of Duty: Modern Warfare 2.

Team FeaR was on a roll and I didn't notice I had missed the show until about 10:30. Luckily, our best friend/DVR picked up the slack and we were able to watch last night.
Since the Band of Brothers comparisons are going to come anyways, let's start there. Given the differences between the European and Pacific theatres, its quite obvious that we can't follow the recruits for two years until D-Day. Instead, we get some very brief glimpses into the lives of a few citizen soldiers in the aftermath of Pearl Harbor and the lead up to the invasion of Guadalcanal. 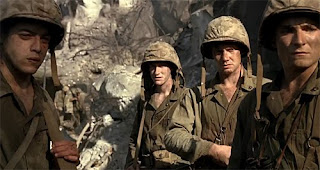 Its not a lot of time to learn the characters and even less time to form any kind of attachment. There is no Captain Sobel character (though there is Lt. Dyke-type incident on Guadalcanal) to bind the group together and their first taste of combat is a very close and very personal encounter with the Japanese.
Sticking with the characters for a moment, is it just me or are there too many stereotypes here? The sensitive writer (by the end of Episode One I was praying for him to the victim of a Banzai-attack), the big tough guy ready to take on the entire Japanese army, the cocksure Italian-Puerto Rican/other minority who is quick with a wise crack and the gung-ho commanding officer were all present and accounted for. I suppose this is a petty complaint, but one that really stood out for both AK and me. 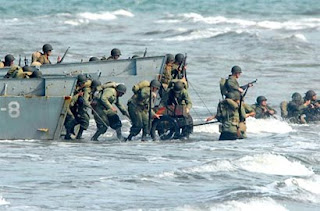 What we did really like was the visual appeal of the show. The naval action was especially fun to watch, from the shot of the soldiers climbing down the netting to their landing craft to the night-time naval battle as the soldiers watched from the shore, this is an element not seen in Band of Brothers and it was a treat. Additionally, the lengthy scene showing the soldiers landing on the beach and marching through the jungle did an estimable job of building suspense to the point where I expected a full on battle at any second, and as such, found myself on the edge of my seat. I am really looking forward to more of this and I am sure the mini-series can deliver. Unlike Band of Brothers and the European Theatre, the Pacific offered an up-close and personal view for the soldiers, who often engaged in hand-to-hand combat with the enemy.
Other than the lack of connection we felt with the characters, we also felt the intro ran way too long, as did the speech to the Marine non-commissioned officers. Again, small little complaints, but we can't gush over everything(that's what she said)!
Check back next week for our thoughts on Episode 2.
Posted by kanadienkyle

Email ThisBlogThis!Share to TwitterShare to FacebookShare to Pinterest
Labels: HBO, The Pacific, This Is Your Opinion